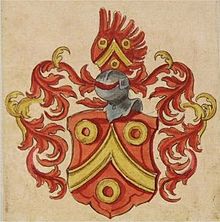 Christoph Jezeler learned from his father, given the choice of becoming a clergyman or taking up his father's profession, the furrier trade . His fondness for mathematics and technology and numerous smaller inventions and improvements soon earned him great recognition. After his father's death in 1756, he continued his father's business until 1758.

From 1763 to 1765 he studied mathematics in Berlin with Leonhard Euler . His work: Calcul Intègral , he copied (1763) in order to study it, since it was not to be printed until two years later (but in fact not until 1768). In the summer of 1765, on a trip to Switzerland, he carried out measurements with a vascular barometer he had invented.

The city of Schaffhausen appointed him city architect in 1766. In this office he made enemies by abolishing abuses and gave up on August 18, 1769, disappointed. His strict, enlightened and reform-oriented ways of acting, which he set out in his 1766 book "Properties and Duties of a Local City Architect", were not welcomed everywhere.

From 1771 to 1772 he expanded his studies in astronomy and mathematics in Paris and London. After returning he measured the Schaffhausen forests. From 1774 to 1786 he was forester. In 1775 he was appointed as successor to Thomas Spleiss as professor of mathematics and in 1778 also of physics at the Schaffhauser Collegium Humanitatis, where he was among other things the teacher of Johann Conrad Fischer and became acquainted with Johannes von Müller . In 1776 he traveled back to Berlin, where he had contact with the mathematician and natural scientist Johann Heinrich Lambert . Letters from the mathematician Anna Barbara Reinhart to him have survived. He then stayed in Vienna, where he got to know the reformed Viennese orphanage

His wish was - primarily to distract himself from unanswerable questions about being - to build an orphanage in Schaffhausen as well. In 1788 he set up an orphanage foundation, which he provided with 10,000 guilders, two thirds of his fortune, and took over the management of the hospital. The building intended for the orphanage was built according to his plans by 1788. On the question of future management, he fell out with the city council and resigned on April 29, 1791 from the management of the project. The finished building was subsequently used as a high school. Christoph Jezler decided to realize his orphanage project in Germany. Before going to Germany, he wanted to visit the Alps he loved and explored again.

On September 5, 1791, he had an accident while passing a steep face on the southern flank of the Hängeten am Säntis. His body was only found on September 14th and buried in Gais in the canton of Appenzell Ausserrhoden . A memorial plaque was attached to the crash site and was last renewed in 1889.