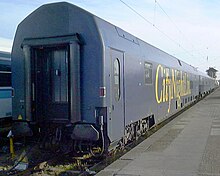 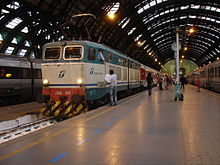 The Citynightline is the former operator of night passenger trains on railway lines in Germany , the Netherlands , in Austria , of Switzerland , Denmark , Czech Republic , Italy and France . The company, initially a subsidiary of Deutsche Bahn (DB), Austrian Federal Railways (ÖBB) and Swiss Federal Railways (SBB), was a stock corporation under Swiss law with headquarters in Zurich and was dissolved in 2010. The City Night Line train type operated by the company has been operated by DB AutoZug since 2010 , which was merged with DB Fernverkehr in September 2013 .

In 1991 the company DACH Hotelzug AG was founded by the German Federal Railways (DB), the Austrian Federal Railways (ÖBB) and the Swiss Federal Railways (SBB). The ARGE Hotelzug, an industrial consortium consisting of Schindler Waggon , Waggonfabrik Talbot , Simmering-Graz-Pauker and Consortium Vehicle Equipment Hotelzug (KWH), was commissioned to develop double-decker sleeping cars in two comfort levels, recliner cars and service / dining cars . In 1992, a total of 54 new sleeping cars were ordered; the recliner and dining cars were converted from existing cars for cost reasons. In 1994 the share of DB was transferred to Deutsche Bahn . In 1995, the company was renamed City Night Line CNL AG (also CNL AG for short ) according to the train type and the first trains started operating on May 28, 1995. Since the exit of the ÖBB and the SBB, the company was a subsidiary of DB Fernverkehr and thus belonged to the DB Group. The trains were now operated in cooperation with the sister company DB AutoZug .

On December 9, 2007, night travel by Deutsche Bahn was bundled under the City Night Line brand , the new type of train replacing the DB NachtZug , the UrlaubsExpress and the previous CityNightLine . In addition to a uniform standard in comfort and service, the color scheme has also been renewed; on the City Night Line, the previous blue has been replaced by light gray with a red ribbon of windows. The trains of the City Night Line now also went to Italy and France.

With the timetable change on December 14, 2008, the train service was changed significantly; z. B. individual trains or train parts were coupled or split in Frankfurt am Main . Certain routes were only offered on weekends and other routes, including Hamburg - Paris , were completely discontinued.

On January 1, 2010, the entire business operations of City Night Line, including all associated ancillary activities, were completely transferred to the sister company DB AutoZug in Dortmund. The product name and the type of train City Night Line were retained. In September 2013, DB AutoZug was dissolved and merged with DB Fernverkehr; the Swiss stock corporation was dissolved and liquidated in the same year. The operating company DB European Railservice stopped train services in December 2016. Various cars were sold to the ÖBB . Since the 2016/2017 timetable change, it has also been operating EuroNight night trains called ÖBB Nightjet

The other previous routes of the City Night Line were abandoned in sleeper and couchette car traffic.