The term Cluster of Differentiation , abbreviated CD, describes groups of immunophenotypic surface features of cells that can be classified according to biochemical or functional criteria. The CD molecules are mostly membrane-bound glycoproteins , some of which are expressed in a cell-specific manner and can have a wide variety of functions: some CDs have a receptor or signal function, while enzymatic activity has been demonstrated for others ; In addition, some cluster molecules are assigned a central role in intercellular communication (see also cell contact ).

After Georges Köhler and César Milstein succeeded in producing monoclonal antibodies in the late 1970s, hundreds of different clones with mostly different, but sometimes overlapping specificities were generated within a few years. However, the molecular and genetic identity of the recognized trait was mostly unknown. In order to bring order to the chaos, antibodies that recognized the same trait were grouped for the first time in 1981 .

After the last Human Leukocyte Differentiation Antigens (HLDA) conference in 2004, the CD nomenclature comprised over 300 clusters (CD1 - CD339, with some gaps), some of which are further subdivided (e.g. CD3γ, CD3δ, CD3ε or CD8a, CD8b) . Clustering them does not mean that the antibodies must necessarily recognize the same epitope on the protein . The last update took place at the December 2014 workshop in Australia. There are now 371 different clusters.

Overlaps in the detection spectrum of the antibodies are also possible. This is shown well by the example of the tyrosine phosphatase CD45. With the exception of erythrocytes , this is expressed by almost all cells of the haematopoietic system. However, depending on the cell type, different splice and glycosylation variants are formed. Antibodies recognize that all of these variants are clustered as CD45, whereas antibodies (engl. Only a limited restricted ) recognize spectrum are clustered as CD45R, CD45RO, CD45RA, CD45RB or CD45RC. In the mouse, CD45R is often used as a B-cell marker and is also referred to there as “B220” (this name is derived from the molar mass (220 kDa) of the corresponding tyrosine phosphatase variant).

The CD nomenclature originally refers to humans , but the corresponding clusters are assigned to the orthologous proteins in other species (especially mice, but also others). To avoid confusion, the CDxx is prefixed with a species abbreviation in unclear cases (e.g. hCD4: human CD4 or mCD25: mouse CD25).

It should also be noted that the protein and gene names do not have to be identical to the CD cluster: mCD161c (CD) - NKR-P1C (protein) - Ly55c (gene). 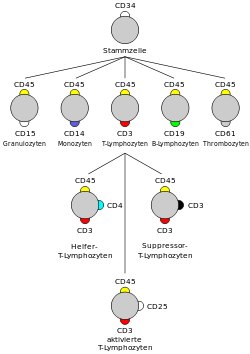 Since different CD molecules are each specific for a certain type or stage of development of cells, they can be used as markers that can be recognized by monoclonal antibodies and detected in this way. The analysis of the expression pattern of CD molecules ( immunophenotyping ) on leukemia cells plays a role in the diagnosis and classification of leukemia . It is of decisive importance, especially in the classification and treatment planning for acute lymphoblastic leukemia .

Due to the cell specificity of various CD molecules, attempts are being made to use them as target structures for pharmacological therapy of various diseases.

An example of a therapeutic monoclonal antibody against a CD antigen is rituximab . This antibody binds specifically to CD20 and can thus trigger an immune response against CD20-positive cells, for example in non-Hodgkin lymphomas .