The Dümmersee , also spelled Dümmer See , is a typical channel lake in the west of Mecklenburg-Western Pomerania .

It is located around 25 kilometers from the border with Schleswig-Holstein and around 18 kilometers from Schwerin between Lake Schaalsee and Lake Schwerin . In the middle of the lake is the Kleiner Werder peninsula, which extends from the west bank. To the south of this is the island of Großer Werder. 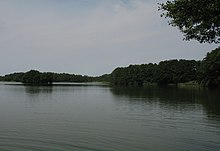 The lake is about 2.6 kilometers long in north-south direction and a maximum of 710 meters wide in east-west direction. The Sude , which flows through the water from north to east, rises in the moats northwest of the lake . The border between the districts of Northwest Mecklenburg and Ludwigslust-Parchim runs in the northern part of the lake in a north-southwest direction. The neighboring communities are called Perlin and Dümmer . The Dümmersee is located in the L 9 nature reserve of the same name, which, in addition to the lake, also includes bank areas.

A building area for holiday homes and weekend homes has been developed from a former campsite on the south-west bank since 2001. A campsite is located in the northwest of the lake.