The title of this article is ambiguous. Additional meanings are listed under David Kennedy (disambiguation) . 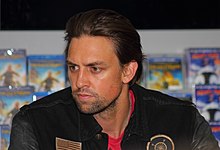 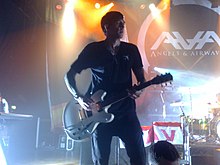 He grew up in Seattle in relatively poor conditions, which prompted him to rebel against the socially better off society. During his school days, he was often teased about his shabby clothes. Out of anger about it, the then 14-year-old David wrote a diss song against the golf and rowing club at his school, which he and two school friends presented at a school festival. The result was immediate expulsion from school. But soon another school in Poway took him on. His parents had been forced to move to California because his father had lost his job in the mining industry and there were better prospects for the skilled construction worker.

There he met Tom DeLonge , who also went to his level. The two hit it off right away and became best friends. However, their opinions were always divided when it came to genres of music. Both had a good sense for music and so they finally combined their two styles. A music teacher, who immediately recognized the talent of the two boys, encouraged the two. He motivated them to play in contests and always gave them support. But soon Tom DeLonge started working on Blink-182 with Mark Hoppus . There he felt his ideas of music better understood and accommodated.

It wasn't until 2002 that the friends met again for the Box Car Racer project . David was playing on Over My Dead Body at the time , but immediately accepted when his friend Tom DeLonge started this side project of Blink-182 . The blink-182 drummer Travis Barker and bassist Anthony Celestino were also involved in this project . In 2003 the project split up again, however, Delonge recorded another album with blink-182 . David Kennedy joined the hardcore punk band Hazen Street , which became very popular in the USA after touring with POD in the summer of 2004 . After the band Blink-182 took a break in 2005, Tom DeLonge turned back to David Kennedy. With him he founded the group Angels & Airwaves , which also includes Atom Willard , the drummer of The Offspring , and Matthew Wachter on bass. The first records were released in May 2006 and the group is currently working on a film.