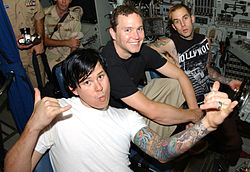 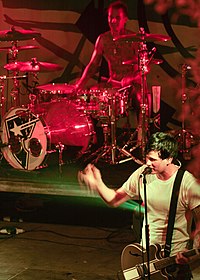 Live performance for US Navy soldiers and their families in Bahrain; Tom DeLonge in front of blink-182 s drummer Travis Barker

Thomas Matthew "Tom" DeLonge (born December 13, 1975 in Poway , California ) is an American musician. He was a guitarist , singer, songwriter and co-founder of the punk bands blink-182 and box car racer . In spring 2005 he founded the rock band Angels & Airwaves .

Tom DeLonge attended Poway High School in California. He was excluded from this for a year because he had appeared drunk to a basketball game. During this time he attended Rancho Bernardo High School. He returned to Poway High School after his "one-year ban" and was voted Homecoming King by his friends at the prom . This action was intended to give the school directors a lesson. After school, DeLonge worked at Gary's Chicken and Ribs in his hometown of Poway. DeLonge appeared as a fast food clerk in the movie Idle Hands . Here he is wearing a sombrero and just says "Alright". DeLonge got his first guitar from a friend at the age of 15. It was broken, but he used it to teach himself to play the guitar.

After school, DeLonge had several part-time jobs. In 1992 Anne Hoppus introduced him to her brother Mark Hoppus . Both wanted to start a band, but had difficulty finding members. When they first met, Hoppus and DeLonge wrote the song Carousel .

In 2002 blink-182 took a break, which Delonge and Travis Barker used creatively. Together with David Kennedy and Anthony Celestino they recorded the album Box Car Racer by their band of the same name and toured America. In early 2003, blink-182 went back to the studio to record the last blink-182 album before it was broken up.

In the summer of 2004 DeLonge became politically active. By his own admission, he detests wars and is an opponent of George W. Bush . In the election for President of the United States, DeLonge campaigned for the Democrat John Kerry . His fans should help bring John Kerry to power and thus stop the Iraq war. DeLonge's older brother Shon is in the army and has also been on duty in Iraq (blink-182 played a concert for the soldiers in 2003).

On the blink-182 tour in 2004, due to differences of opinion within the band, they split up. In England the three decided to take a break of six months (which then became the hiatus). He then worked on new songs and with friends from Taking Back Sunday . DeLonge produced the video for the song This Photograph Is Proof . In spring 2005 DeLonge spoke up again musically, he founded Angels & Airwaves . This consists of musicians from the rock scene such as Adam Willard (now replaced by Ilan Rubin), Ryan Sinn from The Distillers (now replaced by Eddie Breckinridge, now Matthew Wachter) and David Kennedy from his side project Box Car Racer. The first album We Don't Need to Whisper was released in the USA on May 23, 2006, in Germany on June 30, 2006. With Angels & Airwaves he played parts of the announced world tour, they were touring America and Europe. The managers of Angels & Airwaves are Rick DeVoe and Chris Georggin , who also act as managers of blink-182.

On February 8, 2009, blink-182 announced at the 51st Grammy Awards that they would be making music together again. After their reunion tour in 2009, they came to Europe in the summer of 2010 and played at the Highfield Festival , among others .

In January 2015, blink-182 and DeLonge split again, this time due to a dispute over the new album. Shortly after the split, he announced a solo release that was released in April 2015 under the name To the Stars (Demos, Odds and Ends) . He previously published the song New World from it .

On May 25, 2001, DeLonge married his longtime girlfriend, Jennifer Jenkins. One of his favorite bands, Jimmy Eat World , played at the wedding. They have a daughter, Ava Elizabeth DeLonge (born July 15, 2002), and a son, Jonas Rocket DeLonge (born August 16, 2006). Both live in San Diego, California .