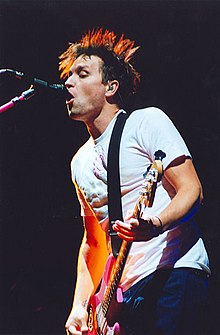 Mark Allan Hoppus (* 15. March 1972 in Ridgecrest , California ) is the bass player, singer and songwriter of the American pop punk band Blink-182 , in 1999 with the album Enema of the State and the single All the Small Things the made international breakthrough.

His sister Anne Hoppus introduced him to Tom DeLonge in 1992 . They both wanted to start a band, but had difficulty finding band members. When they first met, Hoppus and DeLonge wrote the song Carousel . With Scott Raynor (later replaced by Travis Barker ) they formed the band blink-182, in which Hoppus was bassist and singer. After 13 years, the band members decided to take a "break for an indefinite period". This pause officially ended on February 8, 2009, at the 51st Grammy Awards. Mark, Tom and Travis have now confirmed that they will make music together again and announced a new album for summer 2009, followed by a world tour. A new album called Neighborhoods was released in September 2011. After another falling out within blink-182, the band split from DeLonge in early 2015. As a replacement for planned concerts, Matt Skiba was hired by Alkaline Trio . Skiba remained a permanent member of the band and recorded a new album for blink-182 together with Barker and Hoppus. This was published on July 1, 2016 and is called California . It is the band's first album without founding member Tom DeLonge. Another album called Nine followed on September 20, 2019 with the same line-up .

Hoppus has remained loyal to pop-punk after blink-182's "indefinite break" and has since worked with several bands and artists such as Simple Plan and Motion City Soundtrack . He was singer and bass player in the band +44 , which he founded together with blink-182 bandmate Travis Barker. The debut album was released on November 14, 2006. +44 broke up in 2009 after the reunification of blink-182. In early 2010, Hoppus embarked on a project with his friend Pete Wentz , bassist for Fall Out Boy . You wrote the song In Transit for the film Alice in Wonderland . Mark Hoppus made short guest appearances in the videos I Don't Care by Fall Out Boy, Weightless by All Time Low , I'd Do Anything by Simple Plan and on Fenix ​​Tx All My Fault . In January 2019 he founded the super group Simple Creatures with all-time-low guitarist and singer Alex Gaskarth and released the first single Drug . Later in 2019, EPs Strange Love (March 28) and Everything Opposite (October 11) were released. The latter was accidentally leaked on YouTube Music on August 20th .

Hoppus also produced the podcast Hi My Name Is Mark , which appeared at irregular intervals and had over a million listeners. Hoppus introduced new bands, interviewed musicians and reported on his life. The podcast was broadcast on Fuse TV .

Mark Hoppus has sold his shares in Atticus and Macbeth, which he had previously founded with Tom DeLonge. In 2012 he founded the clothing brand HMNIM Apparel Co.

He had, among other things, with his bandmates Tom DeLonge and Travis Barker appearances in various films (e.g. American Pie - Like a Hot Apple Pie and The Simpsons ).

From 2010 to 2012, Hoppus had his own show on the American channel Fuse TV called Hoppus on Music .

Mark Hoppus has been married to Skyelene (Skye) Everly since December 2, 2000 and has a son, Jack Hoppus (born August 5, 2002). He met his wife while filming All the Small Things .