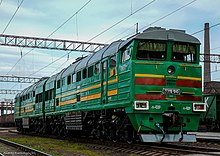 Electric double locomotive PLM 161 BE in the Mulhouse Railway Museum

Double locomotives are mostly used where the pulling power of a single locomotive would be insufficient. By saving two driver's cabs compared to a double traction , maintenance and procurement costs can be saved.

In Switzerland have been series SBB Ae 8/14 and BLS Ae 8/8 developed. The Ae 8/14 was ahead of its time, because the couplings of the time did not withstand the high pulling forces of the double locomotive.

The LKAB uses the IORE double locomotives built by Bombardier on the Swedish ore railway .

In Italy there are several series of electric double locomotives, such as the FS E.656 series .