The Protestant village church Badresch is an early Gothic stone church in the Badresch district of Groß Miltzow in the Mecklenburg Lake District in Mecklenburg-Western Pomerania . It belongs to the Kublank parish of the Neustrelitz Propstei in the Evangelical Lutheran Church in Northern Germany (Northern Church) . 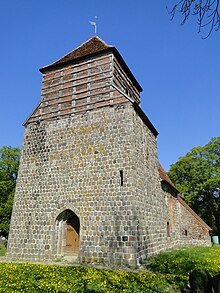 Masonry on the west tower

Sacristy at the choir

The village church of Badresch is clearly divided into the choir, nave and tower, which in some cases consist of remarkably carefully crafted field stone masonry with the occasional use of brick. The choir was erected first, followed by the almost square nave and the barrel-vaulted , transverse rectangular west tower. All of the components mentioned date from the second half of the 13th century. The stylistic assignment of such a rural-archaic building to Gothic is mainly due to the construction time and the use of the pointed arch.

The building is illuminated by pointed arched lancet windows , some of which have been enlarged using brick. On the north and south sides of the ship there are still Romanesque-style biforic panels in the masonry. Portals in the north and west open up the building; In the northern portal there is still a door with iron fittings from the 14th / 15th centuries. Century preserved. The barrel vaulted sacristy is attached to the south side of the choir. The choir is finished with a groin vault , the nave with a ribbed vault. The east brick gable shows a recessed cross that is framed by panels. In the 18th century, the tower was given a square half-timbered end with a pyramid roof and a weather vane from 1793.

A silver chalice was created in 1820; a silver-gold-plated paten was made in the 18th century. Another pewter chalice dates from 1734 and a pewter bowl from the 19th century. A bell from the 15th / 16th centuries Century, two brass candlesticks from the 18th century and a memorial plaque from 1813/14 complete the historical furnishings. The organ with nine registers on a manual and pedal is a work by Ernst Sauer from 1854.