The colors of the thorn devil are adapted to the subsoil of the living space of the respective individual.

Distribution area of ​​the thorn devil 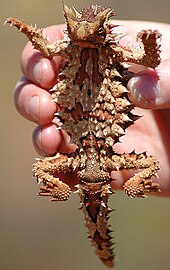 Belly of a thorn devil

The thorn devil ( Moloch horridus ) or Moloch is a species of agamen native to Australia . The rather small, orange-red lizard is unmistakable because of its body completely covered by spines.

The thorn devil inhabits the arid regions of Central and Western Australia, where he creates a small burrow as a hiding place, in which he spends the night, the entire dry season and the hot summer months. In spring and autumn he is active in the mornings and afternoons and goes foraging for food. The thorn devil feeds exclusively on ants ( myrmecophagy ); to do this, he stands next to an ant road and licks the insects on with his tongue. Since there is little drinking water in the desert, a system of microscopic grooves developed in his skin that use capillary forces to transport water from rain and fog to his mouth.

Adult female thorn devils have a head-torso length of 8-11 cm and weigh up to around 89 g, while males remain significantly smaller with a maximum of 9.6 cm and a maximum of 49 g. The species is generally quite stocky and has only a short tail. The most noticeable feature are the pronounced, thorn-like spines on the head, torso, legs and tail. There is a noticeable, prickly hump on the neck. All of the thorn devil's spines are made of keratin .

The animals are orange-red to yellow in color and have black spots and light vertical stripes. The basic color is determined by the color of the sand. Individuals from areas with reddish sand are e.g. B. tends to be more reddish in color than other populations. In addition, the thorn devil has the ability to change physiological color , which manifests itself in the lighter color of active thorn devils.

The droppings of thorn devils are shiny black, egg-shaped, relatively large and practically unmistakable. Thorn devils often set up special places in their action areas where they regularly deposit their excrement - such collections of up to 20 excrement balls indicate the presence of thorn devils.

The thorn devil runs with jerky movements and holds its tail up in a curve.

The thorn devil lives in particular in the arid regions of Central Australia in SW Queensland , South Australia , the S Northern Territory and Western Australia . Deposits in the Nullarbor Desert and in NW New South Wales are unsecured, but possible . The thorn devil inhabits a large part of its range in sand desert with spinifex growth, acacias (" mulga ") and eucalyptus , especially in SW-Western Australia occurrences in the Mallee are known. The species is rare on stone floors.

Thorn devils are diurnal solitary animals. They use burrows 5 to 10 cm deep that they have dug themselves as hiding places, or they hide in Spinifex .

During the coldest (June, July) and warmest (January, February) months, thorny devils remain largely inactive in their hiding place. They are active in autumn and especially from late winter to early summer when mating and oviposition take place. During the rest of the year the activity pattern is bimodal. They rest in their hiding place for the night and then sunbathe in the morning. In the late morning they look for food, spend the hot lunchtime in their shelter, and go looking for food again in the afternoon.

In radio telemetric investigations in the Great Victoria Desert , male thorny devils covered an average of 66.6 m per day, while females only covered 31.7 m. In one single case, a male covered around 300 m in one day. It is not known whether thorny devils have an action space that has been used for a long time ; Since ants are often unevenly and alternately distributed spatially, the thorn devil is perhaps a semi-nomad.

Thorn devils position themselves next to an ant road to hunt ants ; this need not run on the ground, thorn devils also prey on tree-dwelling ants. To do this, they lurk on tree trunks, sometimes standing upright and using their front legs to support themselves on the trunk. The animals place themselves very close to the ant trails and catch the ants with their tongues. The thorn devil is the fastest known iguana among the iguanas (1 ant / 350 ms), which can be explained by a number of adaptations. Most lizards pounce on their prey in a forward motion and open their mouths more slowly at the beginning than at the end. The thorn devil, on the other hand, does not have to pounce on the ants, as it can get close to ant roads and has a relatively long neck. Instead of opening his mouth slowly at first, he opens it at maximum speed and lets his tongue snap out. The thorn devil also needs little time to swallow. Thorny devils living in the wild eat ants at rates of up to 12 ants / min, over short periods of time also 1 ant / sec.

Scales of the thorn devil in the SEM . From Comanns et al. (2011), Beilstein J. Nanotechnol.

The microstructure of his scaly coat enables him to absorb water droplets from dew, fog and the very rare rain that are carried to his mouth by the structure of his body surface. The topmost keratin layer of the scales is sculpted in a honeycomb shape; these honeycombs have a diameter of 10-20 micrometers and are 5 μm deep. This surface structure makes the body surface of the thorn devil strongly hydrophilic and water droplets run on the skin of a thorn devil to a thin film of water and not down from the animal. The water then runs in a system of microscopic grooves between the scales by capillary force to the mouth of the thorn devil.

Standing water is often not available and is not drunk. The thorn devil metabolizes 0.3 ml of water a day, which is comparatively little for a lizard of its size.

Little is known about the reproduction of the thorn devil in nature. Only one clutch is produced per year. After studying ovarian follicles and testes , it appears that mating occurs in both autumn (May) and spring (August and September). However, oviposition occurs only in late spring - some females store sperm from matings from last fall. It is not known how mates are found, but mating assemblies of two males and two females have been observed.

In the Great Victoria Desert three females have been observed laying eggs; they laid their eggs in self-dug nesting chambers in September, October or November. Cavities as nests are uncommon among reptiles; most species lay their eggs in loose substrate. The clutches comprised 6-7 eggs and accounted for 34.2-41.7% of the body weight of the pregnant females. The young animals hatched after 124 to 127 days and had an average head-trunk length of 3.57 cm. The young animals eat the eggshells after hatching - a behavior that is unusual for scallops. This is likely to provide calcium . Finding the eggshells is made easier by an air-filled nesting chamber.

Thorny devils grow up to their 6th year of life; Males stay smaller than females because their growth rate decreases earlier. Life expectancy is a maximum of 20 years.

Natural enemies and avoidance of enemies

Thorn devil hunters include birds of prey, snakes, dingoes, foxes and monitor lizards . When a predator approaches, thorn devils freeze in their current position, often with one leg still raised. They are barely recognizable, especially because of their spines they are well camouflaged. However, the spines do not injure the stomach walls of predators.

The thorn devil was first described in 1841 by the zoologist John Edward Gray (1800–1875), who referred to a specimen issued by John Gould (1804–1881) in London in 1840 . Gray derived the generic name Moloch from the Moloch cult , horridus could stand in Latin for both the rough, prickly body covering of the thorn devil as well as "terrible".

No subspecies of the thorn devil are recognized.

The phylogeny of the Australian agamas was elucidated by cladistic analyzes of both mtDNA and nuclear DNA . Accordingly, the thorn devil has a special position as the only dry- loving ( xerian ) species in the Mesian (moisture-loving, often in the rainforest) radiation of the Australian agamas . While all other Australian agamas living in arid regions (e.g. Pogona ) are united in a taxon called Amphibolurinae , the evolutionary line to the thorn devil represents an independent adaptation to the drought of Australia. The thorn devil is probably the last survivor of a basal Mesian Group that, according to the molecular clock, split off from the rainforest inhabitants 18 million years ago.

The thorn devil is the Australian equivalent of the toad lizards ( Phrynosoma ) in the arid regions of North America, which are also characterized by spines and ants' diet. It is about convergent evolution , the genera Moloch and Phrynosoma are not closely related.