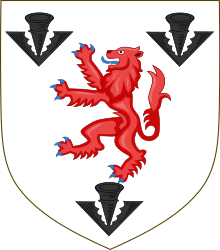 Coat of arms of the Dukes Sutherland from the Egerton family 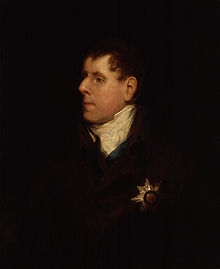 The title was bestowed on January 28, 1833, George Granville Leveson-Gower, 2nd Marquess of Stafford . He had been a Member of the House of Commons for 20 years before inheriting his father's titles and possessions. He is considered the richest Briton of the 19th century.

The great-grandfather of the first duke was raised to Baron Gower , of Sittenham in the County of York , in 1703. He was also a Member of Parliament and also Chancellor of the Duchy of Lancaster . This title belongs to the Peerage of England . In 1691 he had inherited the title of 5th Baronet , of Sittenham, which was given to one of his ancestors in the Baronetage of England in 1620.

In 1746 the grandfather of the first duke, who held the office of Lord Seal Keeper for many years , was appointed Earl Gower with the subordinate title Viscount Trentham , of Trentham in the County of Stafford . Both dignities belong to the Peerage of Great Britain .

Finally, the father of the first duke was raised to Marquess of Stafford in 1786, also in the Peerage of Great Britain. From 1755 to 1794, with only brief interruptions, he worked in the highest government offices. 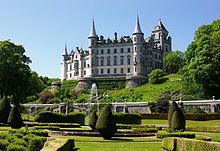 The second Duke inherited from his mother in 1839 the title Earl of Sutherland (created 1230) and the subordinate title Lord Strathnaver , both of which belong to the Peerage of Scotland . Since both titles can also be inherited in a female line if a title holder has no sons, they passed to his niece when the fifth duke died in 1963.

Both the first and the second Duke received a seat in the House of Lords while their father was still alive , as they were given the subordinate title of Baron Gower in advance ( Writ of Acceleration ).

The coat of arms of the Dukes of Sutherland from the Leveson-Gower family was squared by the coats of arms Gower (field 1 and 4), Leveson (field 2) and Sutherland (field 4); later a heart shield was added to this coat of arms .

The coat of arms of the Dukes of Sutherland from the Egerton family shows a red lion in silver, which is accompanied by a black arrowhead at the top and bottom.

List of the Dukes of Sutherland, Earls and Barons Gower and Gower Baronets