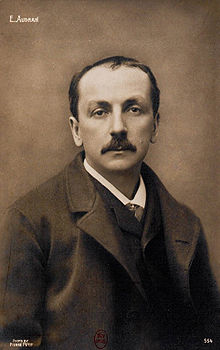 Edmond Audran - the registration of the birth certificate

The birth certificate - the contemporary transcription

Audran came from a musical family and was a son of the singer Marius Pierre Audran (1816-1887). He received a thorough education in Paris , one of his teachers was Camille Saint-Saëns ; u. a. he was a student at the École Niedermeyer .

In 1861 he first went to Marseille , where his family had since moved, and worked there as the organist of St. Joseph. As a composer, he was still almost exclusively concerned with sacred music at that time , only gradually turning to secular works. Through a friend of the family, the writer Henri Chivot , he got the libretto "Der Großmogul" to set and in 1867 this play was premiered at the Théâtre du Gymnase .

It was not until the 1860s that the first stage works were performed, first in Marseille and later in Paris. At the end of the 1870s, his works finally caught on in the French capital. He now also took up residence here and devoted himself entirely to operetta. Many of his works had great success in Paris and beyond.