Oak processionary moth:
a caterpillar; b doll with cocoon;
c butterfly;
d Piece of a ball of spun after one of the last moults

The oak processionary moth ( Thaumetopoea processionea ) is a butterfly ( moth ) from the tooth moth family (Notodontidae).

The moths reach a wingspan of 25 to 32 millimeters (males) or 30 to 36 millimeters (females). The males have glossy ash- to brown-gray colored forewings, on which two cross bars run. These are dark and have a whitish border on the outside and are located in the disc or post-disc region , whereby their exact position varies. In the submarginal area near the wing tip, there is a dark, jagged drawing directed towards the wing tip. Sometimes there is a dark discoid stain between the two dark transverse bands . The wing base is brightly colored. The dark-fringed hind wings are yellowish-white in color, lightly greyishly pollinated and have a brown-gray, diffuse curved line in the post-disk region. This merges into a clearly recognizable spot in the inner corner. In the females, the forewings are darker, gray to brownish-gray in color and have only an indistinct, weak mark, which can sometimes be completely absent. Their hind wings are also darkly fringed and gray-white in color. The yellow-brown antennae are double-combed in both sexes, but those of the female are shorter and also not combed as long. The thorax and abdomen are very hairy gray-black, the end of the abdomen of the female is blunt and has a wreath-shaped anal bush . The fore as well as the hind wings can be very dark, in which case they do not have any markings. Males appear very rarely that have almost the same coloration as the females.

The animals look very similar to the pine processionary moth ( Thaumetopoea pinivora ), but their drawing is usually less pronounced. One can distinguish the similar species well by its white colored hind wings and the only small spot in the inner corner as well as the missing arch line.

The oak processionary moth is widespread from the Iberian Peninsula across southern and central Europe east to southern Russia and the Middle East. It is absent on several Mediterranean islands, in northwestern Europe and occurs in Fennoscandinavia only in the southernmost part of Sweden.

In Germany, as a result of the mass increase, all federal states are now affected, especially Berlin, Brandenburg, Saxony-Anhalt, Baden-Württemberg, North Rhine-Westphalia and Bavaria.

The species is mainly in the lowlands of the planar to the colline height step on. Oak-rich forests, such as oak-hornbeam forests and pine forests with oak vegetation, are settled, preferably in dry and light locations, but also in oak-elm floodplains. However, they also occur in other habitats on individual trees, such as at the edges of the road, in parks and in urban areas.

As the name suggests, the caterpillars of the oak processionary moth are mainly found on oaks , occasionally - especially in years of heavy infestation - but also on some other tree species, especially the hornbeam . Solitary trees or trees on the edge of the forest (especially on the south side, which is favored by warmth) are particularly infested. The egg clutches of the oak processionary moths of 100 to 200 pieces consist of about one millimeter large white eggs . They are mostly deposited on older oaks in the crown area on thinner branches and other smooth bark places in the form of an elongated plate and camouflaged by anus scales and secretions. The embryo develops into the finished young caterpillar in autumn, which then overwinters in the egg and hatches in early May. The caterpillars go through five to six stages of development until pupation and are up to five centimeters long. They have a dark, broad topline with velvety hairy fields and red-brown, long-haired warts. They live socially and go in single file searches for food in groups of 20 to 30 individuals, hence the name “ processional spinner”. The older caterpillars withdraw during the day and for moulting in caterpillar nests (webs), which can be up to a meter long, on the trunk or in branch forks of oaks. From the third stage, the larvae develop stinging hairs with barbed hooks that contain a nettle poison , thaumetopoein .

The caterpillars feed on the leaves of their host trees. They eat the entire tissue area of ​​the leaf blade and only spurn the midrib and thicker side ribs of the leaf. They are considered pests because they cause clearing or clearing. In the event of strong occurrence over several years, the tree can be damaged either directly or through secondary effects.

Natural enemies of the oak processionary moth are bed bugs , parasitic wasps , caterpillar flies , the cuckoo , the oriole and predatory beetles such as the doll robber . 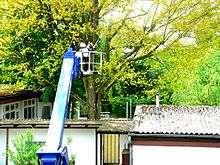 Fighting oak processionary moths by spraying them with Bacillus thuringiensis

Measures to regulate the population of the oak processionary moth for forestry reasons are only justified in exceptional cases. In the vicinity of settlements and recreational facilities, the caterpillars of the oak processionary moth are fought for health and hygiene reasons. The use of pesticides is particularly useful up to the second caterpillar stage before the stinging hairs develop.

Various techniques are used to combat it. Thus, from large areas by helicopter or individual trees from the ground using chemical pesticides treated ( diflubenzuron ). The occasional flaming of the oak processionary moth's nests is considered problematic. The fixation of the nests with chemical binders and suction can also be used to reduce stinging hairs. Another control approach is the large-scale application of a spray mixture containing the bacterium Bacillus thuringiensis to the leaf surfaces of the infected trees. The metabolic products of this bacterium combine in the intestinal tract of the caterpillars with the enzymes found there to form toxic substances, which cause the caterpillars to stop eating after 3 to 4 days.

Environmental associations strictly reject extensive spraying operations against the oak processionary moth from the air; other animals, such as the caterpillars of other butterflies or breeding birds, could be harmed. Nests could also be vacuumed - but more laboriously. The NABU only considers the targeted use of chemical substances as a last resort if people are in danger in the vicinity of public facilities and places in settlement areas. In forests, however, where humans are not directly endangered, the large-scale spraying of insecticides is feared to have negative long-term effects on the ecosystem.

Stinging hair of the caterpillar of the oak processionary moth

Caterpillar dermatitis on the arm

The very fine stinging hairs of the caterpillar, which contain a protein poison called thaumetopoein , can cause caterpillar dermatitis in humans.

Warning notice at a rest area in Lower Saxony

The stinging hairs of the caterpillar break easily and are carried over long distances by air currents when the weather is good. The old larval skins remain in the “nests” after molting, which is why the concentration of stinging hairs is often very high. Old web nests, whether clinging to the tree or lying on the ground, are a constant source of danger. The caterpillar hairs are long-lasting and accumulate in the environment over several years, especially in the undergrowth and in the ground cover (grasses, bushes).

The hair of the third larval stage (May, June) of the oak processionary moth is dangerous for humans. They also cling to clothes and shoes and always trigger new toxic reactions when touched. The (almost invisible) stinging hairs easily penetrate the skin and mucous membrane and attach themselves there with their hooks. Caterpillar dermatitis can show itself in three different clinical presentations:

The skin reactions (if left untreated) often last for one to two weeks. Usually all areas of the skin that were not covered are affected. The skin and mucous membrane symptoms can be treated with cortisol preparations . Antihistamines help against itching . Irritation of the mouth and nasal mucosa from hair inhalation can lead to bronchitis , painful coughs and asthma . This would require cortisone sprays and sprays with bronchodilator agents. Inpatient treatment with infusion of cortisone or theophylline is rarely necessary. General symptoms such as dizziness, fever, tiredness and conjunctivitis also occur. Allergic shock reactions are rare.