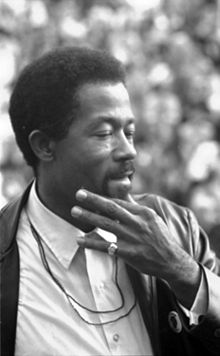 Leroy Eldridge Cleaver (born August 31, 1935 in Wabbaseka , Arkansas , † May 1, 1998 in Pomona , California ) was an American writer and co-founder of the Black Panther Party . His most important work, published in 1968, is the collection of essays and letters, Soul on Ice .

Eldridge Cleaver was born in Wabbaseka, Arkansas. His family moved first to Phoenix and then to Los Angeles , where teenage Cleaver was arrested for stealing and marijuana trafficking. In 1957 he was charged with assault and attempted manslaughter in the notorious San Quentin and Folsom Prisons . During his time there, he wrote a series of essays that clarified his views on racist issues and revolutionary violence. In 1968 these were published in the book Soul on Ice , which became the philosophical foundation of the Black Power movement .

After he was released from prison in 1966, Cleaver helped found the Black Panther Party and became its spokesman. Within the party, he was considered radical. In 1968, the year he was a candidate for the Peace and Freedom Party in the US presidential election and finished seventh with 36,563 votes, Cleaver was wounded in Oakland after a shootout between Black Panthers and police.

"What is the" black experience "? The murder on the Tallahatchie River made him angry, the experience made him angry, it coincided with a time when he, as a prisoner, was trying to clarify his sexuality, reading Karl Marx and Bakunin and, from this mélange, gave his life a new direction: released he took up the fight against the white system of the ogres by, like so many black men, despising women of the same color and raping the women of the white rulers. Anti-racist struggle, carried out in the field of sexuality. "

Cleaver fled the USA and lived in exile in Cuba (6 months) and Algeria , then in France . A violent rift broke out between himself and Huey Newton , which split the party. As a result, he also felt increasingly uncomfortable in socialist exile.

Back in the USA

When Cleaver returned to the United States in 1975, he had made a radical political change. He renounced the Black Panthers and told the press that he believed he was being treated fairly by the American legal system. After a brief trial, the attempted manslaughter charges were dropped and replaced with a suspended sentence for assault. In the same year he tried to re-establish the pubic capsule ( French braguette ) from the 16th century in jeans fashion .

Cleaver became a "born again Christian " and a staunch anti-communist . As such, he tried unsuccessfully to run for election to the Senate. He said his anti-communist beliefs arose from his experiences in communist countries: "I have sworn an oath on my heart to fight communism until the day I die," Cleaver told the press during his election campaign.

In the mid-1980s, Cleaver became addicted to cracks, which in turn brought him into conflict with the law. In 1988 he was given parole for theft and possession of cocaine. In 1992 he was arrested again for cocaine possession. A judge was removed from the following trial for illegally imprisoning Cleaver.

In 1994, Cleaver's life was in danger after an addict shot him in the head. With the help of his family, he got clean and immersed himself in evangelical Christianity. Most recently, Cleaver was a counselor for the University of La Verne in Los Angeles.

In 2001, Byron Vaughn Booth (former "Defense Minister" of the Black Panters [ Panther Deputy Minister of Defense ]) told the FBI that Cleaver had discovered in Algiers after returning from a trip to North Korea that his then wife Kathleen had one in his absence Affair with Black Panther activist Clinton Robert Smith Jr. had started. In Booth's presence, Cleaver shot Smith with an AK47 and secretly buried the body with his help. The American-Algerian journalist and writer Elaine Mokhtefi , who at the time looked after Cleaver on behalf of the Algerian government, reported in 2017 that Cleaver confessed to the murder immediately afterwards and under the circumstances Booth had reported in 2001. As a motive, however, Cleaver told her that Smith had embezzled funds from the Black Panthers and wanted to break away with them. According to Mokhtefi, the body of the murder victim was discovered and identified by the Algerian authorities at the time, but the crime was not officially pursued.

Soul on Ice contains the well-known revolutionary quote: “We will be human beings. We will be, or the world will be razed to the ground in our attempt to become one. "