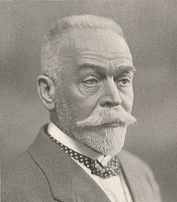 Pfeiffer attended high school in Wiesbaden and then studied medicine like his brother August. Emil Pfeiffer studied in Bonn , Würzburg and Berlin , where he obtained his doctorate in 1869. He then worked as a field assistant doctor in the Franco-Prussian War before settling as a doctor in Wiesbaden in 1872. Here he became a city ​​doctor in 1872 and made a name for himself as a spa doctor and studied the healing properties of mineral waters from local springs in detail. As a pediatrician, he dealt with questions of infant nutrition, campaigned for the establishment of children's homes and crèches and described the Pfeiffer glandular fever (infectious mononucleosis, an infectious disease of the lymphatic tissue caused by the Epstein-Barr virus ) , which was later named after him .

Between 1887 and 1905 he was secretary of the Society for Pediatrics . As an internist, he published various papers on gout and was a founding member and until 1914 permanent secretary of the Congress for Internal Medicine founded in Wiesbaden in 1882 , an annual traveling meeting of the most important clinicians in German-speaking countries. On the recommendation of a colleague, he was called to Tehran to consult the Shah of Persia, Mozaffar ad-Din Shah, who was seriously ill with gout .

In addition to medicine, Pfeiffer also devoted great interest to botany. In his garden he grew numerous rare plants. He combined artistic talent with his interest in natural science by painting the wild plants of his homeland with watercolors. In Wiesbaden Museum of Natural History collection about 1,200 are in the library watercolors kept by Pfeiffer, 2012 by the museum as DVD to the public has had access.