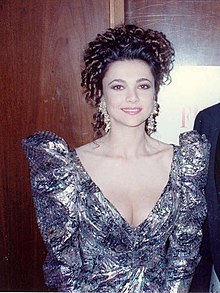 She left London at the age of 17 to work as an actress in the USA. Her first film role was in Im Banne des Kaliph when she was 17 .

In 1982 she got her first major role as Holly Scorpio in the series General Hospital .

However, she had her breakthrough in the series The Denver Clan , where she - as the successor to Pamela Sue Martin , who dropped out of the series - embodied the second " Fallon Carrington ". She later played the same role in the offshoot series The Colbys and returned to the mother series after the series ended until it was also discontinued in 1989. After that, things have calmed down around Emma Samms.
She still had a few guest appearances in series, such as Diagnosis: Murder or murder is her hobby . In 1991 she played the role of "Fallon Carrington" for the last time in the TV movie Dynasty - The Reunion . In 2003 she starred in the BBC hospital drama Holby City for four episodes .

In 2006 the Dynasty Reunion Show: Catfights & Caviar was filmed on behalf of CBS in the Filoli -Mansion (the "Carrington" house from the opening credits of the series The Denver Clan ) , to which many of the actors at the time attended for the 25th anniversary of the series met to reminisce. In feature films, excerpts and scenes from the series were shown and comments from Emma Samms were shown.