Endeavouria septemlineata is a species of land planarians nativeto the Pacific region. The species is the only member of the genus Endeavouria .

Endevouria septemlineata are glossy black in color and reach a body length of 40 millimeters, less often up to 60 millimeters, with a width of about 2 millimeters, the front end of the body is pointed. Fixed individuals show a whitish color with seven dark vertical stripes. The underside is mottled gray. However, species and genus cannot be determined based on color characteristics alone. This requires internal characteristics.

In the species, the crawling sole covered by cilia is narrow, always narrower than half of the underside, about as wide as the ventral nerve plate. The musculature consists of muscle bundles that build a thick dorsal layer and a thinner, only half as thick ventral layer under the epithelium . The parenchymal musculature consists of only weak transverse fibers on the dorsal side; on the ventral side, there is a strong band of longitudinal fibers and intermediate fibers under the nerve plate. The eyes form a single row on either side of the edge of the top. The copulatory organ is an evertable penis with an intrapenial papilla, the common atrium is strongly folded, the female organ is horizontal. The genus differs from Caenoplana and Kontikia in the narrower creep sole, from Pimea in the lack of a suction cup, from Timyma in the different shape of the front end.

The species was first detected in the mountains of Hawaii, although the assumption has also been made that the species was only introduced here. To date it is not known where Endeavouria septemlineata originates from, but it is assumed that this species has its original habitat in the Indo-Pacific region, as all known species of the Caenoplanini tribe are native to this area.

After it was discovered in Hawaii, the species was found as a neobiont in the Cook Islands , on Tahiti , and later in the east and south of Brazil.

Biology and way of life 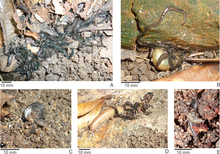 Accumulations of geoplana septemlineata on different prey organisms in Brazil

As is typical for land planarians, the species feeds in a predatory manner. On Hawaii itself it was noted as an effective predator of the great agate snail ( Lissachatina fulica , formerly Achatina fulica ) that was introduced to this island . Numerous land planarians succeed in joint attack to eat pits and holes in the snail's body tissue with the everted “proboscis”, whereby even very large individuals can be overwhelmed and eaten. Individuals from Brazil were found feeding on woodlice, millipedes, earwigs and snails in similar groups in the field, but preferred dead prey organisms in the terrarium, so they may be more likely to be scavengers .

Laboratory tests showed that they are successfully attacked and eaten by a number of land planarians of the genus Obama native to Brazil . Endeavouria septemlineata showed no escape behavior when in contact with these predators. Only after an attack did an escape reaction follow, whereby there are two different strategies. One strategy is the rolling escape behavior, in which the individuals first lift the abdomen and bend it forward until it touches the ground before the front end is moved into the front in a rollover movement. In the second strategy can Endeavouria septemlineata a portion of its rear end yield when it is caught by a predator. The rear end then grows back completely.

The generic name Endeavouria honors the sailing ship Endeavor , with which James Cook made his first voyage of discovery to Australia and New Zealand .

The type epithet is derived from the Latin, septem ( German seven ) and lineatus ( German striped ) due to the dark colored longitudinal stripes .

The species was first described as Geoplana septemlineata by Libbie Henrietta Hyman from the island of Hawaii in 1939 and transferred in 1991 by Robert E. Ogren and Masaharu Kawakatsu to the genus Endeavouria newly established by them for the species . It belongs to the land planarians (family Geoplanidae).