Enigma-T ("Tirpitz") in the National Cryptological Museum of the USA

The Enigma-T (also written: Enigma T or ENIGMA T and also referred to as Tirpitz-Enigma , or Tirpitz for short ; from the Japanese Tirupitsu ; allied alias Opal .) Was a key rotor machine that was used in the Second World War especially for the communications of the two War allies Germany and Japan was conceived. It was also referred to as the Tirpitz machine after the German Grand Admiral of the former Imperial Navy Alfred von Tirpitz (1849–1930) . It should not be confused with the Enigma replica San-shiki Kaejiki developed in Japan . 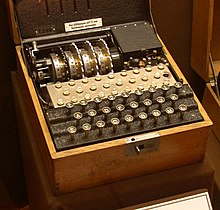 When the cover is open, you can see the reversible roller on the left

The Enigma-T was based on the commercial model Enigma-K . Like this one, but in contrast to the Enigma I , Enigma-M3 and Enigma-M4 models used by the German Wehrmacht during the war , the Enigma-T did not have a plug board . As a cryptographic peculiarity compared to the usual Wehrmacht Enigmas, however, it had a "settable" (adjustable, but not rotating) reversing roller .

The Enigma-T also used an exclusive set of rollers in which the eight different rollers available not only have a single transfer notch (like rollers I to V of the Enigma I) or two notches (like rollers VI to VIII of the Enigma-M4) but had five transfer notches. This resulted in the middle and left rollers being indexed much more frequently than with most other Enigma models. This increased the combinatorial complexity of the machine and strengthened the cryptographic security. Depending on the key, three of the eight rollers were selected and installed in the machine. In addition, the entry roller on the far right of the roller set was wired completely differently than on all other Enigma models . The exact wiring of the rollers of the Enigma-T (as well as for other Enigma models) is given in the article on the Enigma rollers . 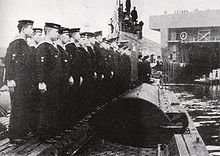 After the Japanese attack on Pearl Harbor on December 7, 1941 and Germany's declaration of war on the USA on December 11, 1941 shortly thereafter, the Japanese Empire and the German Empire agreed in a secret agreement in August 1942 that their secret communications should be included in the future to encrypt a special machine. They chose “Tirpitz” as the code name for the new system and the associated key panels were called “garden fence”. The first ten Tirpitz machines reached Japan with the help of the Japanese submarine I-30 together with key instructions and keyboards for the garden fence in April 1943. A second shipment, now of 169 machines, reached Japan in December 1943 on board I-8, another Japanese submarine.

The Tirpitz system had already been put into operation on August 1, 1943. The first key lists that were used for this purpose were called “Gartenzaun I” and they remained valid until the end of the year. On New Year's Day 1944, they were replaced by "Gartenzaun II". The Allies first noticed the Tirpitz encrypted radio traffic in March 1944. They intercepted about 20 radio messages by August of that year, when the radio traffic was lost after the last Japanese submarine attempting to reach Europe was sunk reach.

In August 1944, shortly after the landing in Normandy ( Operation Overlord ) , Allied troops moved 70 Enigma T-machines in a storage shed near the French port city of Lorient , which served as a submarine base for the German Navy captured. These were there ready for shipment to Japan. But the Japanese submarine I-52 that was supposed to pick them up had been sunk shortly before after meeting the German submarine U 530 in the Atlantic on June 23 . Presumably by mistake, the T-models were then not removed by the Germans and so fell into enemy hands. As early as September 2, 1944, the first copies reached the American OP-20-G , a special cryptanalytic working group of the US Navy , headquartered in the American capital Washington . The cryptanalysis of the machine began immediately there. 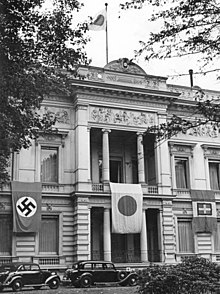 The Japanese Embassy in Berlin (1940)

The Tirpitz radio messages intercepted in 1944 could only be broken in the following year from March 1945 . The allied successes were limited to the breaking of the radio communication encrypted with the Enigma-T by Japanese naval attachés between their representations in Europe, such as in Bern, Stockholm, Lisbon and Madrid, but mainly the Japanese embassy in Berlin and Tokyo, allied code designation "JNA- 1". In the last weeks of the war, for example, the Allies obtained information about the German defense efforts in and around the capital directly from situation reports sent to Tokyo by the Japanese embassy in Berlin. The radio communication between the OKM and the Japanese Navy , called "JNA-18", however, could not be broken . The deciphering of the Enigma-T was facilitated by the lack of a plug board (in contrast to the other Wehrmacht models) . Due to their cryptographically strong features, such as adjustable reversing roller, eight completely rewired different rollers and in particular five transfer notches per roller as well as the comparatively low message traffic and the associated low number of cribs , the deciphering for JNA-18 was not successful.

If the machine had also had a plug board, or even - as planned - the plug-in reversing roller D , then it might have been practically "unbreakable". The historian and cryptologist Dan Girard suspects in this case: "It is doubtful that the Allies could have broken it" ( German  : "It is doubtful that the Allies could have broken it " ). This is in line with the opinions expressed by British codebreakers from Bletchley Park , such as Gordon Welchman and Peter Twinn . Welchman commented: “We would have been in grave trouble if each wheel had two or three turnover positions instead of one” ( German  “We would have had serious problems if each roller had two or three transfer notches instead of [only] one” ) . And Twinn wrote: "They certainly missed a trick in not combining multiple-turnover wheels with plug connections" ( German:  "They [the Germans] certainly missed a trick by not combining rollers with multiple transfer notches and the plug connections" ).