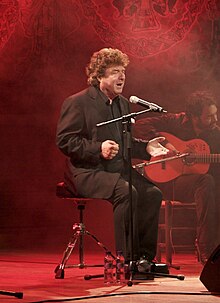 Morente grew up singing flamenco in his hometown. At the age of 18 he came to Madrid, where he became known as Enrique El Granaíno and performed with musicians such as Pepe de la Matrona , Nina Corti, Bernardo el de los Lobitos and Manolo de Huelva . Soon he began to fuse different flamenco styles and introduced texts by classical Spanish poets into flamenco singing.

In the late 1960s, Morente took part in dance projects by pianist Antonio Robledo and his wife Susana Audeoud : La Celestina and later Obsession , which premiered with the Canadian National Ballet. In 1967 he recorded his first album Cante Flamenco . Another project with Robledo was Fantasia del cante jondo para voz flamenca y orquesta . Its premiere took place in 1986 at the Royal Theater of Madrid with the Symphony Orchestra of Madrid under the direction of Luis Izquierdo and the guitarists Juan Habichuela and Gerardo Núñez .

In 1988 his project El loco romantico After Miguel de Cervantes ' Don Quixote was performed in Granada . In 1990 the Chamber Orchestra of Granada, conducted by Micha Rachelevsky , played the piano with the guitarists Pepe Habichuela and Montoyita and Antonio Robledo at VI. Bienal de Flamenco premiered his Allegro solea .

In the late 1990s, he worked with the Bulgarian women's choir Angelite and established links between flamenco singing and Bulgarian folk music. With the rock band Lagartija Nick he played on the album Omega (1996) music based on texts by Federico García Lorca and the Canadian singer-songwriter Leonard Cohen . Since the late 1980s, Morente has also performed with his daughter Estrella Morente .

Morente died in a clinic in Madrid as a result of an operation on esophageal and stomach tumors.