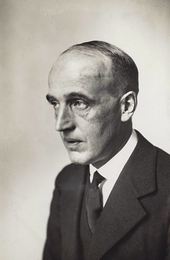 He was the son of Ludwig von Zech-Burkersroda (1853–1927), owner of the manor von Börln in the Kingdom of Saxony , and Margarete, née. from Liège. After school he took up law studies at the University of Leipzig , which he continued in Heidelberg, Berlin and Halle. In 1904 he became a member of the Corps Saxo-Borussia in Heidelberg . In 1906 he passed his legal traineeship, completed military service and received his doctorate.

In 1909 he joined the diplomatic service of Prussia and in 1914 became adjutant to the German Chancellor Theobald von Bethmann Hollweg , whose daughter Isa he married in 1915.

In 1917 Count von Zech-Burkersroda went to Munich as envoy of Prussia and in 1922 as envoy to Helsingfors . From 1925 he worked in the Southeastern Europe subdivision of the Foreign Office before becoming envoy in The Hague in 1928 . After he had taken part in a party meeting of the NSDAP in The Hague in 1932, this was reprimanded by Chancellor Heinrich Brüning , saying that the participation of German foreign representatives in party meetings was undesirable. On May 1, 1934, Julius Graf von Zech-Burkersroda became a member of the NSDAP. In 1935 the embassy prevented the Munich private lawyer Karl Neumeyer from being invited to lectures at the Hague Academy for International Law , since Neumeyer was Jewish. After the German invasion of the Netherlands, Belgium and Luxembourg on May 10, 1940, von Zech had to leave The Hague and was given early retirement on June 7, 1940. With his wife he retired to his manor Schloss Börln and took care of the maintenance of the castle park.

After the end of the Second World War , Graf von Zech-Burkersroda was arrested by representatives of the Soviet military administration . He was taken to special camp No. 4 in Bautzen , where he presumably died on January 19, 1946. After that, the district administrator of the Wurzen district informed the family that the war commandant had confiscated the manor.

There is a memorial plaque in Eulau .

From his marriage to Isa, geb. of Bethmann Hollweg (1894-1967) following children were born: