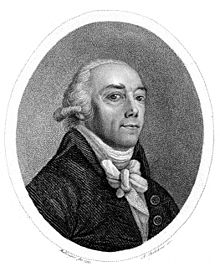 Ernst Ludwig Gerber at the age of around 50

Ernst Ludwig Gerber (born September 29, 1746 in Sondershausen ; † June 30, 1819 ibid) was a German composer who became known as the author of composers' encyclopedias .

Ernst Ludwig Gerber received his first music lessons from his father, Heinrich Nicolaus Gerber . In 1765 he began his law studies in Leipzig , but devoted himself primarily to composition. In 1768 one of his works was performed publicly for the first time. In the same year he returned to Sondershausen, where he became the music teacher of the princely children.

In 1775 he took over the position of court organist from his father. In the following years he studied music history and finally published his historical-biographical lexicon of the Tonkünstler , which he later replaced with an improved and expanded edition. In addition, he published articles in several music magazines. In 1794 he was appointed court secretary by Prince Günther Friedrich Carl for his services . He died unmarried in his hometown in 1819.

Gerber's writings are also important sources for modern music research. His lexica provides detailed information on German composers in particular. The archive of the Gesellschaft der Musikfreunde in Vienna, to which Gerber sold his extensive library, houses many of his writings.