The Erzgebirge Toy Museum Seiffen is an internationally recognized specialist and specialist museum for Erzgebirge toys and Erzgebirge folk art . It was opened in Seiffen in 1953 . In 1973 the Ore Mountains Open-Air Museum was added as a folklore and historical museum with 14 houses typical of the Ore Mountains from the period before 1900 on the outskirts of the toy village. The museum complex is located on Hauptstrasse 203.

The history of the toy museum begins with the Seiffen wooden toys and wooden goods exhibition , which took place in the Albert Salon from July 9 to August 3, 1914. At an entry price of 50 Pfg. - 25 Pfg. For children - the exhibition included, for example, a Noah's Ark with 300 animals, chess pieces, products of the tire turning trade, which at that time was only practiced in Seiffen - in a compulsory guild - as well as larger animal figures that have been cut out of posts. On display were products from the rotary shop and splendid carvings, as well as work covered with straw, which were no longer common in the early 20th century, but which were made again at the request of the manager. The exhibition was organized by Pastor Hermann Härtel (born September 30, 1864 in Lichtenstein ; † August 7, 1919 in Seiffen / Sa.), Together with the district trade association, of which he was chairman for many years. Pastor Härtel furnished the exhibition with part of his community collection.

In a room designed like an old Erzgebirge living room there was a painted four-poster bed (from 1764), a huge chest (1734), a chest painted on the inside of the lid (1785), a colorful wardrobe painted with scattered flowers (1798), a huge peasant table exhibited with a fine wooden plate, earthenware, guild mugs, glasses and other household items. On the table was a mighty clay jug (1739), a pewter lamp ( Gockel lamp ) and an open house Bible. The room was rounded off with a chandelier with chips. After a tour, visitors were able to buy a “miniature farmhouse parlor with the stove bench in the matchbox” at the cash register. 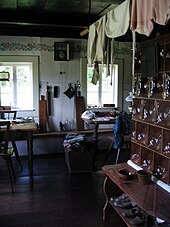 On December 5, 1920, the newly established toy museum opened in the state technical college. The "Older and newer toys" collection, which has been compiled since 1914 by the founder, Professor Alwin Seifert (1873–1937), was enriched by the "Pastor Härtel Collection". With the exhibits shown at the 1914 trade show, a farmhouse parlor was put together, together with a rare tiled stove and stove bench . A chandelier (made by Louis Strauss) attached above the table (which has since been restored) brought the room into the usual Christmas decorations. There was no lack of Christmas angels, miners, nutcrackers or the smoker. The exhibition also included interesting old and new toys and teaching samples from the trade school. At that time it was the only toy museum in Saxony.

At the beginning of the 1930s there were efforts in the Seiffen area to create a central advertising exhibition. The then State Toy School took over the design and equipment of the Seiffen toy advertising show that opened in 1936 .

Origin of the tire animals in the museum (2009)

Tire turning in the Museum Seiffen (2009)

On July 5, 1953, the house was reopened as a local history and toy museum and finally renamed the Erzgebirge Toy Museum Seiffen . Hellmut Bilz was the director of the museum . The first visitor to the museum was Rudolf Mauersberger , whose Dresden Kreuzchor had sung in the Seiffener Pinge the evening before . In 1999 the toy museum underwent extensive reconstruction and expansion. Today around 5000 exhibits and extensive background information are presented on three floors.

The conception of the content aims to present the entire Ore Mountains toy area; including the bohemian part . Important changes in the cultural and economic area are affected. The oldest exhibits, especially those of Christmas customs , date from around 1800. These treasures of old Christmas folk art tell of the spirit of a Christmas with lights in the Ore Mountains. The arks on display in particular were considered to be important export items overseas around 1880. In another exhibition complex, exhibits show the diversity and originality of former miniature toys.

Individual artistic handwritings and the special life's work of individual manufacturers are examined in detail elsewhere. With sample sheets, price examples and lists of goods, the historical role and working methods of the toy publishers as well as the international links between the toy corner are interpreted. Finally, the bow is made to handicrafts and the contemporary innovations of contemporary wood design. In the attic, there is a changing large special show, smaller cabinet exhibitions such as “Mining in Folk Art” or “Woods of the World - the World of Wood”.

The Mechanical Heimatberg , which has been in operation in the exhibition since 2008, is an attraction . 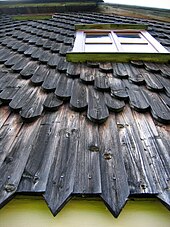 Wood shingling on one of the 14 rebuilt buildings in the open-air museum, July 2009

The Erzgebirge Open-Air Museum , opened on May 2, 1973 as a department of the Seiffen Toy Museum, sees itself as a folkloric and historical museum in which everyday life in the Ore Mountains of the 19th and early 20th centuries is documented in various houses, workshops and building complexes. The starting point was the preserved Preißler hydropower rotating mechanism from 1760, in which an attempt was made in the 1960s to make the structure and technical system accessible to the visitor in function. In the area surrounding this monument, structured in a scattered settlement typical of the ridge landscape of the Ore Mountains, the following 14 buildings (complex) have been transferred to date (as of August 2020):

The houses, barns, sheds or technical systems come from the region of the central Ore Mountains. The hydropower rotary plant is a selected site for the proposed candidacy for the UNESCO World Heritage Site of the Ore Mountains Mining Region .

View over the existing buildings of the Ore Mountains Open Air Museum. Half to the left is the historic hydropower rotating mechanism ("Preißler'sches Wasserkraft-Drehwerk"), around whose original location the museum was built.

View of the historic hydropower rotating mechanism ("Preißler'sches Wasserkraft-Drehwerk") in the Erzgebirge open-air museum. The building, built in 1758/60, is the oldest originally preserved slewing gear in Seiffen. The property has been home to the craft of tire turning for over 100 years . The spruce trunks required for this were stored in the pond, as they were best worked when they were wet. At the same time, the water drove an overshot water wheel, which drove the saw and the lathes of the slewing gear.