Deutscheinsiedel is a district of the Saxon community Deutschneudorf in the Erzgebirge district . 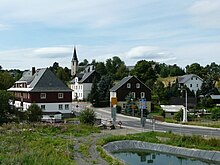 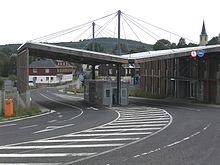 The scattered settlement Deutscheinsiedel is located about 3.5 kilometers southeast of Seiffen in the Ore Mountains . The settlement lies directly on the German-Czech border, which marks the course of the Schweinitz here .
A historic Erzgebirge pass leads through the location . The summit of the Deutscheinsiedler saddle at 720  m above sea level. NN is about 1 kilometer northwest of the town center.
It is the lowest mountain passage between the Vogtland and the Eastern Ore Mountains . To the north of the village is the 818 m high Teichhübel and the area of ​​the "Deutscheinsiedler Hochmoorkomplexes". This is also where the Heidengraben runs , an artificial moat originally created for mining , which transfers water from the small Schweinitz to the Seiffenbach near Heidelberg .
The state road 207 Eppendorf –Deutscheinsiedel, the S 213 Niederlochmühle – Deutscheinsiedel and the S 214 Olbernhau –Deutscheinsiedel begin or end in the village . In addition, there is a border crossing for car traffic that was reopened in 2002.

a seal mark of the former municipality from around 1900

The first written mention dates from 1425 as a czol uff dem Eynsidel . The name of the place comes from the older place Böhmisch-Einsiedel on the other side of the border. In 1602 the name was beym Einsiedel and in 1668 it was called the German Einsiedel , whereby the later prefixed “German-” served to differentiate the place.

A board mill and rafting is mentioned around 1600. In the Thirty Years' War this mill and a neighboring farm were burned down in 1634, from 1646 the estate was rebuilt. With the support of the landlord August von Schönberg , residents from Seiffen, Neuhausen and Bohemian Einsiedel moved in.
The sale of part of the Einsiedler forest to Elector Johann Georg I in 1653 led to a flood. A schoolmaster is mentioned in 1731, and a school building was not built until 1899.

August Schumann mentions German settlers in the State, Post and Newspaper Lexicon of Saxony in 1814 concerning a. a .:

“It belongs partly in writing to the Purschenstein manor , partly also officially to the Lauterstein office . […]
The village has 1 one- aisle mill . There is also a royal one from the road leading from Bohemia to Freiberg . Customs collection and an accompanying escort from the Lauterstein main escort. "

In 1839 the old manors were dissolved. The community was re-formed from the royal and lordly shares, and the area of ​​Brüderwiese, which until then belonged to Heidelberg, was added.
With the establishment of a post office in 1850, the place received the official name Deutscheinsiedel . A telegraph connection to Seiffen was established as early as 1889. On July 31, 1899, the road connection to Deutschneudorf was opened.

The work “New Saxon Church Gallery” from 1901 names the manufacture of animals from wood and dough as the main line of business for Deutscheinsiedel .

The church was consecrated on September 25, 1905. In 1926 a country home of the YMCA was inaugurated. In 1936 Deutscheinsiedel became a branch church in Deutschneudorf. In 1949 peat cutting was stopped, and in 1979 the school was closed for good.

Parts of the municipality of Deutschneudorf