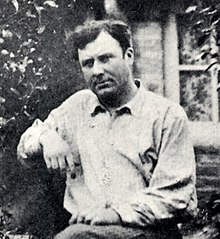 Birthplace of Atget in Libourne (France)

Atget began his career as an actor with moderate success . After taking photos as a hobby for some time, he made photography his profession. His subject was Paris, the city where he lived at 17 rue Campagne-Première and which he loved. His series Paris pittoresques and Le vieux Paris are noteworthy . At the turn of the century he documented old Paris with his bulky large format camera in order to systematically catalog the smallest details of the city. His photos show the parks, buildings, streets, shop windows, prostitutes, workers and even doorknobs of Paris. There was a need for these recordings not only from tourists and collectors, but also from painters and stage designers who used his photos as templates for their own work. He later also sold series to museums and libraries. Although he was able to earn his living in this way, he did not achieve lasting success artistically or financially.

Atget worked with an 18 × 24 cm camera, which was already considered obsolete in its day. The historically wrong anecdote is often rumored that Atget persistently refused to switch to a Rolleiflex offered by his friend Man Ray because it was "too fast" for him. Rolleiflex prototypes were only available from 1928, production of this camera began in 1929, but Atget died in 1927.

In 1920 Atget sold a large part of his collection to the École nationale supérieure des beaux-arts de Paris . Although this sale was not a commercial success, it saved his collection, which was already showing significant storage damage. Atget had met the young photographer Berenice Abbott through Man Ray , who after his death acquired the remaining collection from the estate, published it in books and finally sold it to the Museum of Modern Art in New York . Thanks to your work, Atget was not forgotten.

The Atget crater on Mercury is named after him.