On its website, the UMC in Austria formulates as follows: “The focus of our church life is God's love, which is expressed in Jesus Christ and applies to all people.” Methodist missionary work in Austria was characterized by great social commitment. The Methodists baptize infants, but they only become members when they join. There are male and female pastors.

In an introductory brochure with the title Evangelical Methodist in Austria from 2013, the Evangelical Methodist Church in Austria presented its understanding of the Christian faith. In doing so, it also addressed the process of biblical interpretation by - following the "Quadrilateral" ( square ) by John Wesley - named "four criteria" which "contribute to the interpretation of the Holy Scriptures", namely the Bible (ie the consideration of other biblical passages, ultimately the dogmatic image obtained from previous Bible reading), the tradition (ie the previous interpretation of the Christianity, as it is reflected for example in Bible commentaries) and (life) experience ; the participation of reason as an aid in "processing" affects all of these factors. 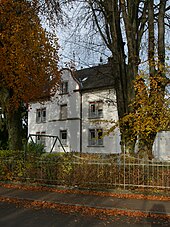 In the 2001 census, which also recorded religious affiliation, 1263 people (Austrian citizens plus foreigners living in Austria) stated that they were Methodists. In Austria there are ten Methodist churches: four in Vienna and one each in Bregenz , Graz , Linz , Ried im Innkreis , Salzburg and St. Pölten .

Bishop Patrick Streiff is responsible for the Central Conference Central and Southern Europe . In addition to Austria, this region also includes Belgium, France, Switzerland and some Eastern European countries as well as currently two North African countries. The delegates of this region meet every four years for the central decision-making conference, which is chaired by the bishop. The Austrian district meets for an annual conference, chaired by the superintendent (currently Pastor Stefan Schröckenfuchs in Vienna).

Until about 1970 Methodists were heavily involved in the Evangelical Alliance ; Superintendent Hinrich Bargmann worked on its board for a long time, during the Second World War as its chairman. Since about 1970 (the year in which the Roman Catholic Church in Austria became an “observer” in the World Council of Churches in Austria (ÖRKÖ)), cooperation within the framework of the ÖRKÖ has come to the fore for the Methodists. For the period from 2014 to 2017, the Evangelical Methodist Superintendent Lothar Pöll was elected chairman of the ÖRKÖ. In the meantime there is church fellowship with the Evangelical Churches AB and HB , which is practiced as pulpit and communion fellowship and in joint religious instruction.

In 2013, the free churches in Austria were legally recognized as an independent religious community. The UMC does not fall under this legal concept. The UMC in Austria therefore does not use the term free church for itself, even if the UMC is often classified as such in the German-speaking area.

The Austrian Methodist Church was a founding of the British Wesleyan Church . In January 1870 the South German Methodists sent a lay preacher to Vienna: Christian Dieterle. At that time there was already a Baptist church in Vienna . As religious communities not recognized by the state, both free churches were repeatedly suppressed by the authorities at the end of the Habsburg monarchy. The full-time preacher was essential for Methodist missionary work. In 1876 Christoph Beutenmüller succeeded Dieterle. This was followed by Johann Rück in 1880 and Friedrich Rösch in 1888. Rösch got in contact with Baroness Amelie von Langenau, who joined the Methodists and was very important in the 1890s, also through her wealth. She supported the establishment of the union between the Wesleyan congregations and the Episcopal Methodist Church in 1897, also financially.

From 1911 FH Otto Melle worked in Vienna; later he had important functions in Germany: director of the theological seminary, then bishop. The Alliance prayer week in the war year 1917 stuck in his memory.

Hinrich Bargmann was superintendent during the Second World War . He also acted as chairman of the Evangelical Alliance in Vienna.