The first church service meetings of Baptists in Austria are recorded in Vienna in 1847 . In 1869 the Viennese congregation of baptized Christians / Baptists was officially founded . In 1953 the Federation of Baptist Congregations in Austria was founded, which in 1998 acquired legal personality as a denominational community . By joining forces with four other church federations ( Evangelicals , - Free Christian Community Pentecostal Church , Elaia Christian churches , Mennonites , 2013) was the Free Church Free Churches in Austria as a legally recognized church (religious community) .

The federal government represents 25 local congregations, with around 1,500 baptized relatives (as of 2014). The organization is based in Vienna-Landstrasse .

Beginnings and persecutions after 1848

By journeymen who are on the roll were that Baptist doctrine was in the 40s of the 19th century in the Empire of Austria brought.

Karl and Theresia Wisotzky were among the first to find fertile ground for this missionary activity . They lived in Vienna and opened their apartment for church service meetings in 1847, from which a small community developed. Johann Gerhard Oncken , who founded the first German Baptist congregation in Hamburg in 1834 , visited the young community as early as the summer of 1847 . 25 listeners, so you can read in Oncken's notes, listened to his lectures. In a major campaign, initially 10,000 and after Oncken's departure another 20,000 tracts were distributed.

In 1848 the later Bremen Baptist pastor Johann Friedrich Oncken worked in Vienna for a short time . As long as the revolutionary popular rule lasted, he was able to hold large meetings in a monastery . A number of new members were won in the process. The Baptist pastor and church elder Johann Ludwig Hinrichs , who came from Jever , also traveled to Vienna at Oncken's initiative and helped the young church to establish its first structures.

For the Baptists, who had not yet been constituted, a time of oppression began. As a result of the suppression of the Vienna Revolution by imperial troops, Oncken and Hinrichs were expelled from the Austrian capital. The Wisotzky couple moved to Graz and began further church planting work there.

In 1850, the Baptist Edward Millard , a representative of the British Bible Society , received approval from the Austrian state authorities to distribute Bibles and religious writings in Vienna. But already in the spring of 1851 this permit was withdrawn. During a service, the police carried out a house search, confiscated Bibles and books, and imposed arrest sentences on those present. Millard was expelled from Austria. His bibles and scriptures were destroyed.

In the aftermath, it was punishable to hold public meetings and to celebrate the Lord's Supper and baptism . Children of Baptist parents were forcibly baptized . A law passed in 1867, which guaranteed freedom of belief and conscience in Austria, only benefited the members of the religious communities recognized at the time - in addition to the Catholic Church. Baptists could not legally gather for services even after the law came into effect.

Foundation of Baptist churches from 1869 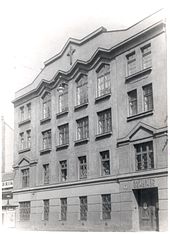 House of the Baptist Congregation in Vienna, Mollardgasse 35, around 1930

The Baptist Congregation Vienna was constituted on December 20, 1869, shortly after Austria-Hungary was proclaimed, under the leadership of its leader Edward Millard and in the presence of Johann Gerhard Onckens, who stopped in Vienna on his return journey from southern Russia and southeastern Europe . Their worship meetings were held in the Millard couple's home. The first evangelist in the congregation was the preacher Bänziger. He was followed by the preacher Hilzinger, who worked in this capacity until 1874. On March 21, 1879, due to a decree of the imperial-royal Lieutenancy under the Enns, an absolute ban on assembly was given to the Baptists, but was reversed in May 1880.

The presence of Baptists has been on record for the city of Graz since 1870. They first met in different apartments. Among them was the house of the Wisotzky couple, who had come from Vienna. In the year the number of baptized parishioners grew so strongly that in 1882 an independent parish was constituted in Graz and released from the parish association of Vienna.

On October 3, 1885, seventeen delegates from five Austrian-Hungarian Baptist congregations met in Budapest for the first time to form an independent association. These five parishes were in Vienna, Budapest, Graz, Snjatin and Prague . They represented around 870 parishioners baptized in faith and their approx. 2100 family members and friends. Edward Millard was elected chairman of the conference. This association became the nucleus of today's national Baptist unions in Austria, Slovakia , Slovenia , the Czech Republic, Hungary and the Ukraine .

Development in the Republic of Austria

It was not until 1921 that it was possible to officially acquire a plot of land for a planned chapel building via a detour founded by a specially founded aid association .

In 2009 another application was made for full recognition in order to benefit from the associated privileges such as religious instruction in public schools or representation in the public media. The obstacle to this was the minimum membership of 2 ‰ of the population (at that time around 16,000) required in the Confessional Community Act; in the 2001 census, 2108 people had committed themselves to the Baptists.

2013 joined then the Union of Baptists and four other related denominational churches, the Federation of Evangelical churches , the Free Christian Church - Pentecostal church , the Elaia Christian communities and the Mennonite Free Church , the Association of Free Churches in Austria together. The recognition of this association "as a church (religious society ) " took place by ordinance of the Minister of Education of August 26, 2013 ( Federal Law Gazette II No. 250/2013 ). This enables, for example, joint free church religious instruction or the establishment of denominational private schools with public rights .

Like all congregations of this free church movement, the Austrian Baptists also emphasize the autonomy of the local congregation .

The Federation of Baptist Congregations in Austria is the umbrella organization that conducts international and interdenominational cooperation and takes on representation in the free churches in Austria . It is led by the federal management. The federal headquarters , known as the federal office , is located in Vienna-Krummgasse.

Today the number of members is around 1500. 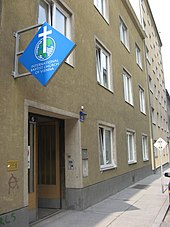 For League of Baptists are about 20 independent municipalities.

More than a quarter of Austrian Baptists are members of Romanian-speaking congregations. They work in the following locations: Graz , Grein , Kapfenberg , Krems , Linz and Vienna (two municipalities).

An international congregation, the International Baptist Church of Vienna , exists in Vienna and conducts services mainly in English .

The Austrian Baptists see themselves as part of the worldwide body of Christ . Your congregations work in the Evangelical Alliance and partly in the Working Group of Evangelical Churches in Austria  (ARGEGÖ).

The Union of Baptist Congregations is a member of the World Baptist Union and the European Baptist Federation . There is close cooperation with the Federation of Evangelical Free Churches  (BEFG) in Germany. He is also a member "with an advisory vote" (ie not a full member) in the World Council of Churches in Austria  (ÖRKÖ).

The aid association continues to exist and has been a member of the Protestant Diakonie Austria since 1996 .

The Children's and Youth Office of Austrian Baptists has national offers for young adults, teenagers and children .

Member churches of the interdenominational association of free churches in Austria