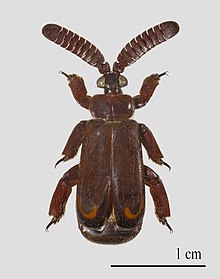 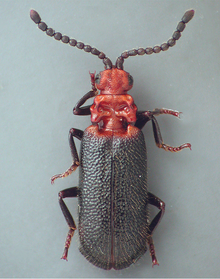 Preparation of a species of the genus Protopaussus

The antennae beetles (Paussinae) are a subfamily of the ground beetles (Carabidae). Around 750 species are known worldwide, of which a few species also occur in the south of the northern hemisphere. Two types are known from Europe. In the past, they were placed in the family rank and accordingly scientifically referred to as Paussidae.

The beetles are either black, like the species of the genus Metrius , or brown, like most species of the Ozaenini , Paussini and Protopaussini . Your body is rounded on the sides or has parallel edges. The Ozaenini can have solid hair, for example for use as a mechanoreceptor; this is missing in the Protopaussini and Paussini. The antennae are thread-shaped (filiform) or pearl-like (moniliform) as in the genera Metrius , Protopaussus and Megalopaussus and the tribe Ozaenini. In the other groups of the Paussini the antennae are heavily modified and have a very small pedicellus , which is sunk deep into the tip of the first antenna segment ( scapus ) and is rigidly connected to the third antenna segment . The flagellomeres on the antennae are widened and often modified into a compact club.

The process on the coxae of the forelegs is elongated and tapered backwards in the genus Metrius , more or less shortened in the other groups and either connected to the rear, laterally with the process of the pleura , or strongly receded. The indentations of the coxes of the front legs are always closed. The two spurs on the tibiae of the forelegs, if present, are in the apical position, but as a rule they are absent or inoperative in the species of Paussini. An organ for cleaning the antennae extends to the vicinity of the base of the anterior tibia or has receded, as in the Paussini. In the genus Metrius , the rear edge of the coxae of the front legs touches the anterior indentation of the ventricle on the mesothorax . The connection between the Ventriten of meso and Prothorax is in the other sensor beetles like the harpalinae formed with a smooth front rim on Mesoventrit and without hexagonal indentation. The coxes of the middle pair of legs are either separated ( Metrius and Ozaenini) or adjoin one another (Propaussini and Paussini) or almost adjoin one another ( Physea ).

In Metrius , most Ozaenini and Protopaussus , the last segment of the abdomen is covered by the wing panels , in Dhanya and most Paussini it is exposed. All antennae beetles have defensive glands in their abdomen for defense.

In the more highly developed types of Triben Paussini and Protopaussini, the upper lip ( labrum ) is often elongated to the side or to the front. The mandibles are relatively small and simply built. The maxillary and labial palps are formed very differently. The chin (mentum) is usually reduced in size and partially or completely receded in the middle. The prothorax is usually heavily modified. Glands on the prothorax are formed in almost all species and are usually linked with indentations, crevices or hairs. The hairs are specially developed in the Protopaussus genus , but are absent in some genera, such as Arthropterus , Homopterus , Carabidomemnus . The process on the sternum of the prothorax is fairly wide and truncated at the back in Protopaussus , but in the Paussini it is greatly or completely reduced. The coxes of the front legs stand out strongly. With the exception of the genus Pleuropterus, the thighs ( femora ) and splints (tibia) are usually widened and flattened in all three pairs of legs. The middle cell of the membranous wings (alae) is triangular with the exception of the genus Protopaussus . The second to fourth sternites on the abdomen are fused, the intermediate margins are barely recognizable or missing. An area for stridulation can be formed on the abdominal side at the base of the abdomen . The last abdominal segment is partially exposed and sclerotized .

The head and the back of the larvae are curved upwards. The head capsule is slightly or significantly rounded on the sides. The point eyes ( ocelli ) are either completely absent or have receded except for one. The seam between forehead and crown is missing. In the Paussini, the pits on the back of the tentorium , a skeletal structure in the head, are designed as a single narrow gap, which is directly adjacent to a deep posteromedian indentation in the lower part of the head capsule. The mandibles are broad at the base and in the Paussini have a weakly sclerotized appendage, the lacinia mobilis , near the retinaculum . The maxilla in the Metriini has four-part palps , in the Ozaenini and Paussini they are three-part. In the latter two groups, the first palpomer is more or less completely connected to the basal phalanx of the maxilla (stipes). The galea, one of the chews, is single-limbed, long and blade-shaped in the Metriini, but absent in the Paussini. The prementum , a sclerite on the labium, is elongated and has tubercles. In the Paussini, the posterior arms of the tentorium arise from a narrow, common branch that is directly adjacent to the posteromedian indentation of the head capsule. The dorsal arms are very flattened and extremely short. In the Paussini the (cranial) part of the hypopharynx directed towards the head has no hem on the longer hair; in the Metriini this is sparsely developed.

The antennae beetles have been found from all zoogeographical regions of the world, but they mainly occur in the tropics. Only a few species are also common in the south of the northern hemisphere. The tribe Metriini , with only two species in one genus, are limited in their distribution to the west of North America. The tribe Ozaenini is distributed over the entire tropics with its 14 genera, but also occurs in the south of North America. The tribe Protopaussini, with seven species in one genus, are restricted to the east of the Orientalis . Paussini is the most diverse and widespread tribe.

The larvae live in burrows or ant nests and are highly adapted in their morphology. The more highly developed species of the tribes Paussini and Protopaussini live at least in the larval stage myrmekophil in bond with ants. This way of life is presumably derived from the specialized hunting and feeding of ants, which characterizes the entire subfamily. In the Metriini and Ozaeniini, the larvae secrete secretion from the glands of their heavily modified abdomen, which, along with other insects, also attracts ants. This presumably enables the larvae to access the ant nests in which they live as parasites . The imagines the probe beetles are adapted to this hostile habitat in various ways and live there either solely as ants guests ( Symphilie ) or an enemy ratio ( Synechthrie ).

The monophyly of the antennae beetles is very well founded and is based on a number of morphological properties, such as the pygidial glands and some characteristics of the larvae. The group has similarities with the bombardier beetles (Brachininae), as they have developed a similar defense system in which they mix chemicals and excrete them via glands and cause them to explode. The construction of the defensive glands, the enzyme glands and the secretion of the secretion differ greatly from the bombardier beetles. It is assumed that the antennae beetles represent a sister group to all other ground beetle groups and are thus one of the most basic groups of them. However, this assumption is not well founded and it is also contradicted by more recent DNA studies, which show the group within the ground beetles as being significantly more developed. A suspected sisterhood with the bombardier beetles is currently not sufficiently justified.

The antennae beetles are divided into the following tribes, which some authors originally viewed as separate subfamilies of ground beetles: