History of the field post up to the Second World War

The occupation of the border in the Franco-Prussian War of 1870/71 showed the lack of military field post, since the civil post and improvised field post were overwhelmed with the high volume of mail. The new Federal Constitution of 1874 gave the Federal Council the authority to centralize and reorganize the army. As a result, the Federal Council created the post of field post director in 1880 and issued the “Ordinance on Field Post” on August 13, 1889, making field post part of the army. Since the staff of the field post was too low at the beginning of the First World War , it was quickly increased and in 1918 reached a battalion strength (1,017 men). In addition, a professionalization strategy was pursued by releasing uniformed postal workers from their previous units and integrating them into the field post. The cooperation between the field post office and the International Committee of the Red Cross (ICRC) played an important role. They jointly handled the mail exchange for prisoners of war abroad and interned soldiers in Germany. In the course of the adjusted troop organization, the army took over the entire corps material of the field post, which until now belonged to the Oberpostdirektion.

During the Second World War, the field postal service included both the postal service for the Swiss army troops and for the numerous foreign army members interned in Switzerland.

During the mobilization on September 2, 1939, the field post service was better prepared than at the beginning of the First World War. Feldpostdirektor Hans Frutiger had a modern organization and trained staff. The nine divisions and three mountain brigades , like the army staff, received their own field post. In addition, there were 17 collective field mail units, which were increased to over 40 units within a short time. If necessary, the field post could work around the clock. To cope with the high volume of mail, the field post in 1940 received 125 members of the women's service (FHD) and their own motorists for the first time . As a result, the field post reached practically regiment strength on January 1, 1945 with 2,744 members.

In contrast to numerous other troop units, the field post - like the catering troops - could not retreat to the so-called Réduit from 1940 , since the postal service had to be maintained nationwide. Most of the field post offices were located in gyms or similar buildings. As in the First World War, the railroad formed the backbone of mail transport. Between 1939 and 1945 the field post carried a total of 150 million parcels and laundry bags as well as 450 million letters, postcards and newspapers. 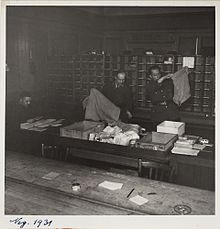 The field post organized the post of internees from June 1940 . Only a few people had previously been interned in Switzerland. During the war, a total of around 24 million items were sent by and for war internees. Although Switzerland would not have been obliged to do so, it granted the internees freedom of postage just like the members of the Swiss army.

The cross-border mail traffic was organized by the field post service in close cooperation with the ICRC . Due to the events of the war, logistical difficulties arose again and again with the delivery of the mail, for example due to the bombing of the German railway lines by the Allies .

A problem for the field post service was the frequent change of camps, which resulted, among other things, from the internees' work assignments. For this reason, the internal post office in Münchenbuchsee had a personal file of all internees who had to be mutated over half a million during the war years. (Post) work that concerned the internees was carried out by them themselves whenever possible. For example, internees were employed as postal orderlies. The rules for postal operations were laid down in the so-called postal orders, which appeared in numerous languages.

On June 25, 1940, the Commissar for Internment of the Army Command ordered the complete censorship of incoming and outgoing interned mail. The censorship office set up in Bern was often overloaded by the high volume of mail, which led to delays in delivery. The field post director, Colonel Hans Frutiger , therefore applied for the abolition of the general censorship of interned mail on August 21, 1940 and demanded that it be restricted to certain groups of people. Although he repeated his request several times, Frutiger was unsuccessful.

According to the postal order, the internees were not allowed to use civil post, to have mail sent to private addresses or to use a pseudonym. All letters to and from internees were only allowed to be delivered if a censorship strip with the inscription “Opened, censorship office for interned mail” was attached. The camp commanders checked packages on site in the camp. The civil post took over the transport of the mail . Military censorship in Switzerland was lifted relatively late on December 20, 1945.

Due to the troop order of 1947 there were new 44 field post units. In 1949 field post officers and NCOs were hierarchically placed on an equal footing with the other units. From 1967, the so-called “ Swiss Office ”, as the telephone switchboard for the field post, took over communication between civilians and members of the army, which massively reduced the time-consuming telegram delivery. For example, soldiers could now be reached quickly in emergencies despite staying in remote areas. As part of a new supply concept, the previous 48 field post units were dissolved in 1977 and 28 stationary field post units were created for them. This tightening had significant advantages. This made it possible to dispense with labor-consuming and time-consuming changes of location, the operating infrastructure was organizationally and operationally optimized and the routes to and from the airport were shortened. Until 1992 the field post was under the PTT General Directorate as the "Field Post Service Section". After the PTT was split up into Swisscom and the Post , the field post was assigned to the latter. With the introduction of the Army 95 , the 28 field post units were converted into 22 field post companies, seven of which were abolished in 1999. In the course of a renewed restructuring of the Army XXI , which still exists today , the remaining 15 field post companies were dissolved. The weapons station offices and, in individual cases, the civil post offices took the place of the field post companies.

To this day, private letters and parcels weighing up to 5 kg have been sent to members of the army on duty and postage-free. The so-called " Fresspäckli ", which relatives send them to work, are therefore popular with military men .

The first Swiss soldiers' stamps appeared in the First World War . They were issued by individual troop units - mostly companies - and had no estimated value because the field post was carried tax-free. The soldiers' stamps usually had no tax imprint and had to be different from the postage stamps. The proceeds from the sale of the soldiers' stamps went to the welfare funds set up by the troops for soldiers in need, as the wage compensation fund ( income compensation scheme ) was only introduced during the Second World War .

Each unit could design its own brand with its specific subject. The small works of art created in this way are also historically valuable. In addition to the soldiers' stamps, self-made postcards were mostly made with a motif of the troops. Both are popular as collecting areas for philatelists . There are comprehensive catalogs of the soldiers' stamps of the First World War (1914–1918) and the Second World War (1939–1945) as well as the catalog of standard cards from the two world wars .