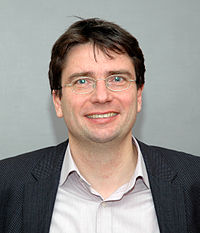 Florian von Brunn (born January 23, 1969 in Munich ) is a German politician ( SPD ). He is a member of the Bavarian State Parliament .

After attending the elementary school of the Katholisches Familienwerk Pullach until 1979, Florian von Brunn graduated from high school in Icking in 1989 . Then he did his community service first. From 1990 he studied philosophy and later modern and contemporary history, with the minor subjects economic and social history and economics, at the universities in Munich and as a visiting student at St. Hugh's College, University of Oxford . The latter with a grant from the German Academic Exchange Service . From 1994 to 1998 he was a scholarship holder of the Friedrich Ebert Foundation . He finished his studies with an MA

From 2005 to 2008 Florian von Brunn served as an honorary director of a parents' initiative (crèche and kindergarten) in Munich-Sendling.

Florian von Brunn has been a member of the SPD since 1990. He is currently deputy chairman of the Munich SPD and assessor in the state board of the Bavarian SPD. He won a mandate in the state elections in Bavaria in 2013 and has been a member of the Bavarian state parliament for the SPD since then. In the state election in Bavaria in 2018, he was able to win another mandate. His political area of ​​expertise is environmental and nature conservation policy as well as consumer protection.

As part of the committee of inquiry into the “Bayern Ei” food scandal , he endeavored to fully clarify and publish the grievances. He also campaigned for more rights and better protection for consumers and the environment in connection with drinking water pollution in Bavaria by perfluorinated and polyfluorinated chemicals (PFC). Most recently, a campaign for supporters campaigned against a ski swing on the Riedberger Horn and thus significantly contributed to the prevention. He is also fighting for a third national park in Bavaria and against the third runway at Munich Airport.

In the member survey for the election of the state chairman of the BayernSPD in spring 2017, which was decided in favor of Natascha Kohnen , he was the candidate with the second highest number of votes.

Florian von Brunn calls for wealth to be better distributed and for more money to be used for pensions, care and education.

Florian von Brunn was an honorary member of the tenants' advisory board and offers tenant consultation hours free of charge. Affordable housing and better tenant protection are two of its political goals.

He advocates more nature and trees in the city and more trains, buses and bicycles instead of private cars. He also calls for sustainable agriculture that protects nature and animals and is profitable for farmers.

Florian von Brunn calls for more transparency and consumer protection, for example in the case of food scandals or the diesel scandal.

Von Brunn is married and has two children.