Presentation of Christ in the temple of Fra Bartolomeo ( Kunsthistorisches Museum Wien, Gemäldegalerie)

Bartolommeo learned from 1484 with Cosimo Rosselli , where he met Mariotto Albertinelli . When Girolamo Savonarola's sermons upset all of Florence, he became one of his most loyal followers and in 1500 retired to a Dominican monastery in pain at his burning .

Bartolommeo's importance lies in the composition focused on the grandeur of the style; His works are characterized by powerful coloring, chaste shapes, serious expression with limited imagination. He exerted influence on Raffael and Andrea del Sarto . He was also a thorough draftsman, of whom a lot of studies still exist.

The main work of his first period is the fresco of the Last Judgment in the cemetery of Santa Maria Nuova, now in the Museum of the Holy Hospital in Florence (1498–99). Around 1509 he painted God the Father in Heavenly Glory, below Magdalena and Katharina (Lucca Gallery). In 1511 he created The Engagement of Saint Catherine , which is now in the Louvre , and in 1512 another engagement of Saint Catherine in the Palazzo Pitti in Florence. 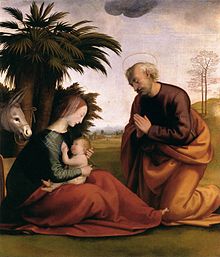 The Flight into Egypt

During his illness in 1514, the Madonna was painted in fresco in the Dominican hospital at Pian di Mugnone . Bartolommeo's most accomplished creations date from 1515, 1516 and 1517: the Madonna in San Romano in Lucca and the Annunciation in the Louvre (1515), the Resurrection of Christ and the Descent from the Cross in the Pitti Gallery, the Holy Family in the Corsini Gallery in Rome and the Assumption of Mary in the Naples Museum (1516); The mural Christ as a gardener before Magdalena in Pian di Mugnone dates from 1517. Paintings by him are now in the Kunsthistorisches Museum Vienna, the Panshanger Gallery in England and the Berlin Museum.

The location of the paintings or collections refers to the year 1889 . These may be elsewhere today.