Portrait of Fritz Leopold Hennig (around 1947)

Fritz Leopold Hennig (born March 17, 1895 in Danzig ; † March 29, 1951 in Dresden ) was a German painter and graphic artist whose versatile work can be stylistically assigned to the taste of the late 19th century and the beginning of the 20th century. He mainly painted oil paintings, but he also used other techniques in his works ( linocut , pen drawing and the technique of drypoint). In addition to his artistic work as a painter and graphic artist, he has written plays such as the operetta "Now strikes 13". 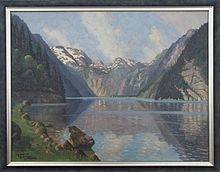 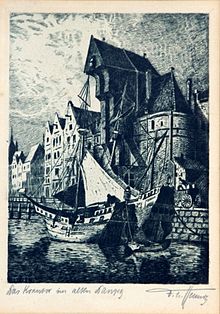 Fritz Leopold Hennig was born as the third child of Medical Council Dr. med. Louis Arthur Hennig (* 1863 in Königsberg; † 1916?) And his wife Anna Julie Theodora Hennig, b. Müller (* 1869 in Danzig; † 1937 in Danzig) was born in Danzig. His older brother Hans practiced as a resident doctor in Gdansk until the end of the thirties. His older sister Margarete Sophia died shortly before she turned 22. Nothing is known about Fritz Leopold Hennig's early years.

Hennig had an excellent general education and liked to surround himself with celebrities of his time (e.g. chamber singer Josef Herrmann , Tino Pattiera ). He was an avowed atheist. His grave was (until it was released in 1961) in the Loschwitz cemetery .

As a soldier in war

In the First World War he took part as a naval pilot. He survived a plane crash in Warnemünde with a Rumpler on January 28, 1916 with only a few injuries. On March 17, 1916 (his birthday), he was shot down again (splashdown) in the Mediterranean near the island of Lemnos, and was taken prisoner by the English.

Hennig studied painting and graphics at the Art Academy in Dresden (1918? To 1921?) And completed his studies as an academic painter and graphic artist. He lived in Sopot ( Free City of Danzig ) in the late twenties and thirties as a graphic artist, painter and designer (including the poster for the Richard Wagner Festival at the Waldbühne there [1931]; painting of the casino in Sopot [1929]) ; Posters for the Sopot spa administration; artistic management of the Sopot children's festival; design of honorary certificates). From this time on he began working as the author of three novels ("Sopot - Endstation" 1941; "Der Eisheilige" 1942; "Stolen Sounds" 1943 [Widder-Verlag, Leipzig]), children's stories (unpublished) and comedies (unpublished ). The landscape and marine painter Geo Fürst (1888 Nuremberg - 1964 Munich), known for his seascapes, was artistically influenced by F. L. Hennig on Malta.

From 1945 he founded and directed the training workshops for arts and crafts in Dresden (1st painting school in Dresden). With the support of the Cultural Office of the City of Dresden, the Strehlener Villa at August-Bebel-Straße 12 (now the Tusculum student house ) with an apartment and studio was made available to him. During this time he was also awarded the title of professor by the Soviet occupation authorities. He trained his students free of charge primarily in the technique of oil painting with motifs of the Königsee, bouquets of flowers, landscapes, hunting scenes and portraits.

Due to the time of political upheaval and the time of rebuilding, the sponsors of FL Hennig were suddenly no longer in their offices. In addition, the type of business with a sales representative (Wolfgang Hennig) and a managing director named Ehlers did not fit into the political thinking at the time. In the course of unfavorable circumstances and the growing resentment, the training workshops were closed in 1949.

He then worked as a freelance painter, graphic artist and author in Dresden at Alpenstraße 2 in the Oberloschwitz district , where paintings were created, but also design drafts for the Circus Eros . He also appeared as the author of the operetta "Now strikes 13". It was premiered in Wurzen in 1948 and played back in Annaberg-Buchholz and Senftenberg . There were also radio broadcasts (1950) of the Mitteldeutscher Rundfunk / Landessender Dresden with excerpts from this operetta.

Hennig was a member of the Reich Chamber of Fine Arts Berlin (1940). He later worked in the Goethe Society in Weimar until his death .