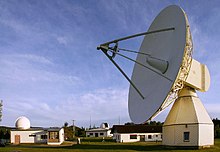 A fundamental station is used to anchor a high-precision geodetic coordinate frame on the earth's surface and is usually a particularly well-equipped satellite station . It establishes the relationship between the terrestrial and the astronomical fundamental system, which is defined by certain celestial bodies and their measurement in the starry sky .

Such a station can be compared to an observatory that specializes in artificial earth satellites and quasars, as well as other astrometry methods . It works with various measuring systems - mainly radio and laser measurements to satellites, GPS , GLONASS and VLBI - which refer to a large number of geologically particularly stable surveying points . A high-precision time system with maser or atomic clocks is also part of the equipment.

Continental drift accurate to the millimeter

At the global level, accuracies of 1 cm and better can be achieved today, which is of great importance for astronomy as well as geodesy and geodynamics . The movements of the plate tectonics can now be demonstrated directly and the speeds of the individual continental plates can be modeled on the order of millimeters per year. Other movements of the earth's body ( earth tides , nutation , polar movement, etc.) and the calculation of its elasticity are made possible by such fundamental measuring stations.

The most important fundamental station in Europe is the Geodetic Observatory Wettzell in the Bavarian Forest near Wettzell , near the German-Czech border. It is operated by the Federal Agency for Cartography and Geodesy (BKG, Frankfurt am Main) and the Satellite Geodesy Research Center (FESG) of the Technical University of Munich as part of the nationwide Satellite Geodesy Research Group (FGS).

Other fundamental stations are in southern Italy , on the Black Sea, in East Asia, the USA, Chile and South Africa. Other observatories largely have this status. a. in Graz-Lustbühel (Austria), in Zimmerwald near Bern, as well as in France, Sweden and North America. Larger gaps in the global network - especially in laser and radio telescopes - still exist in Africa, South Asia and Australia.

All these precision methods are based on the astronomical fundamental system , which is based on 500 quasars at the edge of the visible universe and around 4000 precisely measured fundamental stars in our galaxy. Your current coordinates were published in 2000 as FK6 ( Astronomisches Rechen-Institut (ARI) in Heidelberg).

The terrestrial equivalent of this celestial system - "fetched" onto the rotating "Earth Top" - is called ITRS (International Terrestrial Reference System), and the associated global surveying network ITRF (... frame for coordinate frames). In addition to the continental fundamental stations, there are also numerous permanent GPS measuring stations and some observatories with CCD and other measuring methods.
From each station involved in the ITRS, not only the coordinates in position and height, but also the components of the speed are determined. However, they are only one to ten centimeters a year. All stations together with their six vectors each form a kind of terrestrial coordinate directory called ITRF (F for frame ).

The relationship of the global reference system to the surveying points of the respective national survey is established through coordinate transformations . It can be done either in 3D (see 7-parameter transformation ) or separately according to position ( 2D ) and height (see geoid and height measurement ).