FIMS congresses were subsequently held at regular intervals - sometimes in connection with the Olympic Games. After an interruption due to the Second World War and the reorganization of FIMS at a meeting in Brussels in 1946 , the 7th International FIMS Congress took place in Prague in 1948 . The 32nd FIMS Congress will be held in Rome (Italy) in 2012 , and the 33rd Congress in 2014 in Quebec (Canada). 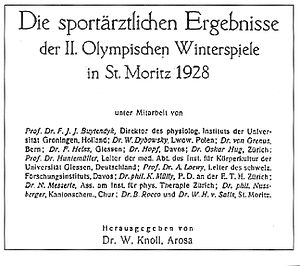 The previous presidents of the FIMS were:

The FIMS awards its gold medal, the FIMS Citation of Honor and the FIMS bronze medal for outstanding achievements in the field of sports medicine . The Prince Alexander de Merode Gold Medal of the FIMS is awarded for services to doping control programs .

The FIMS is formed by the 113 national associations of sports medicine ( German Medical Association for the Promotion of Physical Exercise - today the German Society for Sports Medicine and Prevention - as a founding member and the world's oldest national sports medicine organization),

and by individual members.

The President, four Vice-Presidents, Treasurer and Secretary General are elected for four years each. Together with other selected personalities, you form the FIMS Executive Committee.

The medium of communication and publication is the International SportMed Journal (ISMJ), which appears four times a year.

In pursuit of its goals, the FIMS maintains close links with the World Health Organization (WHO), the International Olympic Committee (IOC), UNESCO , the international sports associations ( Sportaccord ), the World Council for Sports Science and Physical Education (ICSSPE) and the World Anti-Doping Agency (WADA).