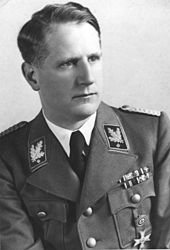 On May 4, 1943, Leonardo Conti received the final report on the opening of the mass graves in Katyn

Leonardo Ambrogio Giorgio Giovanni Conti (born August 24, 1900 in Lugano , † October 6, 1945 in Nuremberg ) was a Swiss - German physician . During the time of National Socialism , as Reich Health Leader , he was also head of the Reich Chamber of Physicians , Head of the National Socialist German Medical Association (NSDÄB) and, as Main Service Manager of the NSDAP, head of the Main Office for Public Health . From 1937 to 1939 he was President of the World Federation for Sports Medicine ( Fédération Internationale de Médecine du Sport , FIMS). In the Schutzstaffel he was promoted to SS-Obergruppenführer on April 20, 1944 .

In 1915 Conti received Prussian citizenship . Three years later he passed a secondary school diploma at the Friedrich-Wilhelms-Gymnasium in Berlin . He then joined as a volunteer in a gunner Küstriner Artillery - Regiment one. Leonardo Conti studied medicine in Berlin and Erlangen from 1919 to 1923 . During this time he was active in the national student movement with his brother Silvio Conti . While still a student he tried to summarize all non-incorporated students in the German Finkenschaft , of which he was a co-founder. In 1923 he passed his state examination. The approval was given Conti 1925; in the same year he received his doctorate on facial soft tissue surgery .

Entry into the NSDAP

In 1919 he joined the DNVP and took part in the Kapp Putsch in 1920. Since 1923 he was a member of the storm department of the NSDAP (SA) and became their first doctor. Between 1924 and 1926 he was also a member of the German-Völkische Freedom Party (DVFP). During the same period he was also the local group leader of the National Socialist Freedom Movement and the German National Freedom Party in Berlin, and worked in the Committee for Public Enlightenment and in the Pan-German Association .

After a medical internship and a voluntary assistant position, he worked between October 1925 and February 13, 1933, first as a general practitioner, then as a general practitioner and pediatrician in Berlin. In 1925 he had a branch in Munich. In 1927 he moved from Munich to Berlin. In December of the same year he joined the NSDAP ( membership number 72.225; holder of the Golden Decoration of Honor). From 1928 he took part in the organization of the medical services of the SA. Together with Martin Bormann and Gerhard Wagner , he organized the development of the aid organization for the wounded (later called the relief fund ). In 1929 he became a co-founder of the National Socialist German Medical Association (NSDÄB), of which he was a member from 1931, and founder of the NSD Medical Association in the Gau Berlin.

As senior physician east of the Berlin SA, Conti recorded the medical treatment of the SA leader Horst Wessel, who was attacked by KPD members , from January 14 until his death on February 23, 1930 . In the same year, Conti switched from the SA to the SS (SS No. 3,982) and became head of the medical service at the Nazi party rally in Nuremberg. In 1931 he joined the Berlin Medical Association . In May 1932 he was elected as a member of the Prussian state parliament, where he worked until its dissolution in autumn 1933. On February 13, 1933, Conti was appointed to the Prussian Ministry of the Interior as Commissioner for special use by Hermann Göring . On April 9, 1933, Conti was expelled from the SS. The reinstatement took place around a month later on May 12th.

Ministry of the Interior and medical guide

After the seizure of power, Conti worked on a voluntary basis for the Reich Ministry of the Interior . In February 1934, Conti became Gauamtsleiter Berlin of the Central Office for Public Health of the NSDAP. On April 12, 1934 he was appointed to the Prussian State Council by Hermann Göring . In the same year he became head of the public health department at the NSDAP Reichsleitung.

In 1935, Conti became SS-Oberführer for “special use” in the staff of the “Reichsführer SS”, and one year later was the City Medical Councilor in Berlin (since November 1st). In 1936 he was head of the medical health service of the XI Games. Olympics . In addition, Conti became a lecturer in public health at Berlin University in 1936 . On January 30, 1938, he became an SS brigade leader. In 1939, Conti was appointed Reich Health Leader, succeeding Gerhard Wagner , and then Reichsärzteführer and, in September, State Secretary, succeeding Arthur Gütt in the Reich Ministry of the Interior. He also took over the NSDAP's main office for public health. In this function he initiated, among other things, the establishment of the Reich Wholemeal Bread Committee . From 1939 he was also head of the “Main Office for Public Health” and head of the NSD Medical Association. In August 1941 he became a member of the Reichstag .

Participation in the T4 campaign

Conti belonged to the group of people who were shown the killing of people in a gas chamber in the old prison in Brandenburg and, for comparison purposes, killing with injections. Conti is said to have made injections himself. This so-called “Brandenburg test gassing” was part of the preparations for the T4 campaign , the mass killing of the sick and disabled. Conti was also involved in spotted fever experiments in Buchenwald concentration camp .

In the SS, Conti was promoted to SS-Obergruppenführer (General) on April 20, 1944 . In August 1944 he resigned as Reich Health Leader. On January 17, 1945, he was appointed honorary professor in Munich. Another appointment as honorary professor at the State Academy for the Public Health Service in Berlin followed on March 3, 1945.

On May 19, 1945, Leonardo Conti was arrested by the Allies in Flensburg. After the German surrender he was supposed to answer in court because of his involvement in the "euthanasia" program, but hanged himself in his cell in the Nuremberg penal institution before the start of the Nuremberg doctors' trial on October 6, 1945 .

Conti left a suicide note stating that he was passing his life because he had lied under oath during an interrogation. He had tried to cover up his knowledge of medical experiments.