GEO600 is a gravitational wave detector based on a Michelson interferometer with a leg length of 600 meters in Ruthe near Hanover . GEO600 is part of the international five-instrument LIGO facility .

GEO600 was set up in 1995 and is run by the Max Planck Institute for Gravitational Physics (Albert Einstein Institute) in Potsdam and Hanover together with Leibniz University Hanover , the University of Glasgow , Cardiff University , the University of Birmingham and the University of the Balearic Islands operated in Mallorca . The budget was around 10 million euros (one tenth of comparable projects). In 2000 GEO600 was a regional project of the World Exhibition Expo 2000 in Hanover.

At GEO600, essential parts of the instruments and techniques were developed and tested with which the two large LIGO detectors in the USA announced the discovery of gravitational waves on February 11, 2016. GEO600 itself is primarily intended for design and development in the LIGO network and therefore not designed for the type of signals that were discovered in 2015 and accordingly no signal was measured there.

In addition to basic research, the facility also serves as a fall-back level in the LIGO system. The project leaders are Karsten Danzmann , James Hough , Bernard Schutz (the latter for the theory). 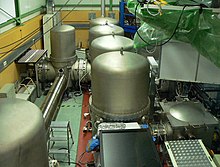 View into the central building with several vacuum tanks, a measuring device (low container with a slight curve at the bottom right) and a section of the vacuum tube (left)

GEO600 consists of nine container buildings with two 600-meter-long trenches covered with corrugated iron, each 600 meters long, arranged at an angle of 93 degrees to each other.

A laser with state-of-the-art laser technology sends a light beam of around three watts via a beam splitter through tubes in which a vacuum is applied. At the end of the tubes, the beams are reflected at the beam splitter meet together and are then applied to the photodiode of the interferometer detected. The light output at the beam splitter is around 3 kW.

With such detectors, the differences in transit time of the light from the two tubes provide information about the compression of space-time . The measurements have to be very precise in order to be able to determine the tiny fluctuations in space-time.

The great challenge is to eliminate the many sources of interference that would obscure a signal. These include, for example, air pressure and temperature fluctuations, as well as ground vibrations of all kinds. The entire system is therefore installed in a vacuum. In addition, existing technologies such as laser stabilization, low-absorption optics, control technology, vibration damping and data processing (around 80 GB per day  ) were further developed. With additional mirrors of high reflectivity , both the laser light and the signal are each constructively superimposed on themselves and thus amplified (dual recycling). Furthermore, the end mirrors are isolated from seismic disturbances by active vibration dampers and a three-stage pendulum suspension. One of the groundbreaking developments by GEO600 is the suspension of these mirrors on glass fibers, i.e. H. the material of the mirror and thus monolithic .

One of the container buildings houses the control room, in which the measurement data from numerous sensors is received. The data processing of the data determined in this way takes place with the participation of Einstein @ home . 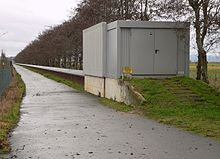 The end building with the eastern arm, which is used for beam diversion u. a. contains a mirror