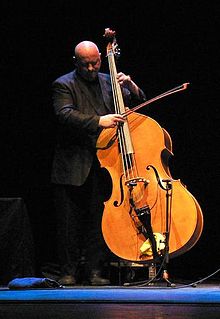 Bryars first studied philosophy at the University of Sheffield before studying music for three years .

His first known musical work was as bassist in the Joseph Holbrooke Trio , which also included Derek Bailey and Tony Oxley . At first playing modern jazz , they soon discovered free improvisation . It was here that Bryars became interested in composition.

Bryars was in contact with John Cage and his New York School (which can be heard in his early works) and was temporarily his assistant. He also came into contact with Morton Feldman , Earle Brown and minimalism . His first known work, The Sinking of the Titanic ( The Sinking of the Titanic ) from 1969, allowing the musicians, a number of different sound and other sources to be used, with the sinking of the Titanic related. Another early work is an arrangement of Jesus' Blood Never Failed Me Yet (1971), which is based on a few lines from a homeless man , both conceptually and acoustically. The stanza, sung slightly crooked, is taken from the hymn of the same name

repeated in an endless loop . Various, increasingly complex orchestral movements that were recorded live are placed on this loop. First created and published as a long-playing record in 1975 , a CD version was created in 1993, which contains further movements and repeats the vocals over the entire 74 minutes, in the final minutes in what appears to be a duet with Tom Waits .

Bryars also played in popular performances, such as with the Portsmouth Sinfonia. Later, independent work includes A Man in a Room, Gambling (commissioned for BBC Radio 3), three string quartets , a number of concerts and a few operas . In 1982 he wrote a Medea after Euripides for the Opéra de Lyon , which he revised in 1984 and 1995 respectively. His opera Marilyn Forever has been performed several times , most recently in Vienna in 2018. He has also created choreographies for Merce Cunningham ( Biped ). In March 2018 his opera The Collected Works of Billy the Kid premiered in Lyon.

Bryars was a founding member of the Institute of Music at Leicester Polytechnic (now De Montfort University ) and taught there for several years. He lives in England and temporarily on the west coast of Canada .