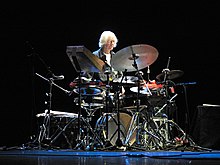 Tony Oxley (born June 15, 1938 in Sheffield , United Kingdom ) is a British drummer . With the many drums, cymbals and bells of his instrument he creates "intricate sound surfaces" (Ulrich Kurth), which ideally can be perceived as vertical instead of (as is common in jazz) horizontal music.

At the age of 8 he learned the piano as an autodidact; he received his first drums at the age of 17. During his military service (1957-1960) he received training in drumming and music theory. From 1960 to 1964 he led a jazz quartet in Sheffield. Together with Derek Bailey and Gavin Bryars he founded the group Joseph Holbrooke , which existed in Sheffield from 1963 to 1966 and , after studying the New Vienna School, was one of the first to play freely improvised music from 1965 onwards. Then in London he accompanied as house drummer of Ronnie Scott Club , among others, Sonny Rollins and Bill Evans , but also played on John McLaughlin's album " extrapolation " and took two plates under his own name with a quintet or sextet on to the next Bailey Kenny Wheeler , Evan Parker and Jeff Clyne included.

In 1970 he founded the Incus record company with Derek Bailey and Evan Parker , one of the first labels to specialize in freely improvised music . Since 1974 he has directed his own smaller ensembles and was a member of the London Jazz Composer's Orchestra . In the 1980s he led an octet with Didier Levallet and a large formation, the "Celebration Orchestra". After a first duo encounter in Berlin with Cecil Taylor ( Leaf Palm Hand , 1988), he performed in a trio with Taylor and William Parker from 1989 to 1991, and has been a regular duo with Taylor for ten years. From 1978 he often played in groups around Ali Haurand (first with Alan Skidmore , later with Gerd Dudek ). He also accompanied Tomasz Stańko , Bill Dixon , Anthony Braxton and John Surman .

In 1998, on Oxley's sixtieth birthday, WDR organized a big concert with various jazz greats (Cecil Taylor etc.); this also resulted in the re-union (and first CD recordings of improvisations) by Joseph Holbrooke.

Oxley uses a very idiosyncratic set of drums, the sound of which he changes through the use of various electronic devices. He also plays the violin .

Oxley, who has lived in Viersen for a long time , is also known as a painter of abstract pictures.