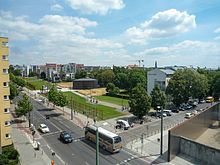 View over the memorial

The Berlin Wall Memorial commemorates the division of Berlin by the Wall and the victims of the Berlin Wall . The national monument, a 70-meter-long original section of the border fortifications, was rebuilt in 1998 by the Federal Republic of Germany and the State of Berlin on Bernauer Strasse (parts of the wall come from other sections) and later expanded. Today the memorial includes an outdoor exhibition, the Chapel of Reconciliation , the Berlin Wall Documentation Center, the Window of Remembrance as well as the visitor center and an exhibition in the neighboring Nordbahnhof S-Bahn station over a length of 1.4 kilometers on the former border strip .

The memorial goes back to an ideas competition carried out in 1994 by the German Historical Museum on behalf of the federal government . The architects Kohlhoff & Kohlhoff prevailed. The costs for the competition and construction amounted to 2.2 million marks (adjusted for purchasing power in today's currency: around 1.61 million euros ). The federal government took over the construction costs while the state is responsible for the maintenance costs.

On September 11, 2008, the Berlin House of Representatives decided to merge the Berlin Wall Memorial and the Marienfelde Emergency Reception Center in the state-owned Berlin Wall Foundation on the anniversary of the fall of the Berlin Wall on November 9, 2008 .

In the course of the following years, the site of the memorial was expanded along Bernauer Strasse. The outdoor exhibition in the border strip was opened in sections and transformed into a memory landscape. Original relics of the border fortifications were uncovered as archaeological windows or marked on the ground with steel traces. The course of the wall was modeled with bars of rusting steel . The location of a border observation tower on Strelitzer Strasse was marked by four steel elements at original height. The memorial's outdoor exhibition tells the story based on the events in Bernauer Strasse and is divided into four subject areas:

The visitor center was opened on November 9, 2009 at the corner of Bernauer Strasse and Gartenstrasse , where you can find out more about the entire memorial site. The outer surfaces of the memorial were redesigned on the western side in the direction of the north train station to a memorial landscape. On this area is also the Window of Remembrance , which has been remembering the victims of the Berlin Wall since 2010. For the 25th anniversary of the fall of the Wall on November 9, 2014, the last section of the outdoor exhibition and the new permanent exhibition “1961-1989. The Berlin Wall ”opened in the renovated documentation center. This completes the expansion of the memorial.

The memorial contains a 70-meter-long section of the border system in the last state of development, as it was when the wall came down. Seen from the west, behind the concrete wall made of industrially manufactured L-shaped elements, a sand surface follows. This is followed by the column path illuminated with lanterns, a signal fence and the hinterland wall . Barbed wire elements are not included. An associated watchtower in its original historical state was subsequently built within the facility. The original watchtower was removed during dismantling shortly after the fall of the Berlin Wall, before the remains of the Berlin Wall were placed under monument protection by the East Berlin magistrate on October 2, 1990 .

The facility cannot be entered by visitors and has been rededicated as a monument. For this purpose, both ends have been closed with steel walls. The northern wall bears the inscription: "In memory of the division of the city from August 13, 1961 to November 9, 1989 and in memory of the victims of communist tyranny".

The documentation center with observation tower

The documentation center in the former community center of the reconciliation community is on the other side of Bernauer Strasse. There are seminar rooms and offices of the reconciliation community and the Berlin Wall Foundation. The permanent exhibition of the documentation center “1961-1989. The Berlin Wall “contextualizes the history of the Berlin Wall and offers the historical background of the history of division, the Cold War and the construction of the Wall up to the fall of the Wall and the unification of the two German states. Part of the building is also a five-story observation tower from which the section of the border fortifications can be viewed.

The church building designed by the architects Peter Sassenroth and Rudolf Reitermann has an oval shape with a facade made of wooden bars. Inside, the earth building artist Martin Rauch built a prayer room using rammed earth. Materials from the demolished Church of Reconciliation were also used in the construction, including a. the bells. The outline of the Reconciliation Church is marked in the outdoor area. The Chapel of Reconciliation was dedicated on November 9, 2000 .

The rye field on the death strip

According to an idea by the Berlin artist Michael Spengler, a rye field has been growing on the former death strip of the Berlin Wall on Bernauer Strasse since 2005 . The rye field is looked after by the agricultural and horticultural faculty of the Humboldt University .

The idea of ​​the art project is to create associations in the context of different historical epochs of Berlin, such as the rural past, but above all the importance of the area as a death strip in the GDR.

The rye is sown in the second half of September and goes into winter after the tillers have been planted. It is harvested in July. With extensive agricultural use, given the current size of the cultivated area, an average harvest yield of three to four quintals could be expected.

In the past, the rye from the small field around the chapel was used to make special communion wafers, rye rolls and bread for the Thanksgiving service and, as part of an art campaign, to make a special whiskey (Fine Berlin Wall Whiskey). 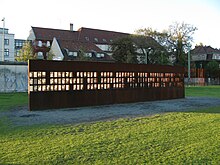 In May 2010 the window of remembrance was erected on the extension of the memorial's outdoor exhibition. The memorial is a 12-meter-long wall made of rusting steel, in which there are 162 windows with the portraits of 130 people who were shot as refugees or bystanders at the Berlin Wall or who died in an accident. The eight killed border guards are commemorated on a stele in the immediate vicinity. The names and dates of the victims are engraved under the pictures. The window of remembrance is located in an area south of Bernauer Strasse, where part of the Sophienfriedhof was once located. This northwestern part of the cemetery was de-dedicated and separated in the 1960s in order to be able to expand the border fortifications.