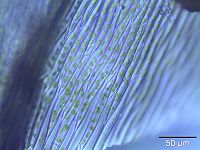 It forms strong, irregularly branched lawns, usually between 5 cm and 10 cm long stems. The color can vary between green, yellow-green or gold-green.

The leaflets of the stems are broadly ovate and drawn out into a short, sharp point. The edge of the leaflet is finely indented. At the bottom, two leaf wings still run a little down the trunk. In contrast to the similar Brachythecium rivulare , the cells of these leaf wings are usually not sharply separated from the cells of the leaf blade. The leaf vein is very strong and ends above the middle of the leaf. The leaves of the branches are somewhat narrower and more clearly serrated, but otherwise similar.

The moss is often fruiting. The capsule is short and obliquely cylindrical. The seta is warty rough.

All in all, it is a very diverse and variable moss.

The common short rifle moss grows on wood, bark, stone and on open and overgrown soil. It prefers nutrient-rich locations.