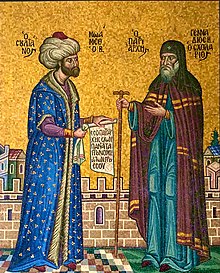 Georgios Scholarios took part in 1438/39 as secretary of Emperor John VIII at the Council of Ferrara-Florence and initially supported the union with the Western Church that was decided there, which, however, increasingly disappointed him. From 1449/50 under the name of Gennadios monk in the Charsianeites monastery, he took over the leadership of an anti-Florentine parallel hierarchy established in Constantinople, the "Holy Synaxis of the Orthodox in Constantinople", as the successor to Markos Eugenikos († 1445). After the Ottoman conquest of Constantinople in 1453, Gennadios Scholarios officiated there from 1454 to 1456 - by grace and as a freedman in personal dependence on Sultan Mehmed II (d. 1481), but elected and ordained according to traditional norms - as ecumenical patriarch, from the western point of view as illegitimate Counter-patriarch to Gregory III. Mammas († 1459 in Rome). In 1456 Gennadios resigned from office. He then retired to a monastery in Macedonia , where he resumed his literary work.

He was a connoisseur of Western philosophy and theology. His colleagues mockingly referred to him as "the Latinist". He commented on Aristotelian and Neoplatonic texts and used them in class.

During his tenure as Ecumenical Patriarch, Gennadios II was confronted not only with the reorganization of the church administration, which had collapsed due to conflict and war, and with a clergy that was simonistic up to the episcopate out of need or inclination, but with the urgent problem of the Islamization of the Christian. Population as a result of coercion, boy reading (Devşirme), marriage problems of various kinds, including forbidden forms of Christian. Second marriage. Faced with the need, Scholarios advocated, by no means to general applause, the generous application of the Oikonomia by facilitating divorce and, with reference to the denial of Peter, by indulgent "delatinification" of repentant Union supporters. In liturgical questions he turned against any λεπτολογία ("small spirit").