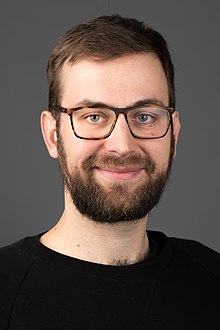 Georg Philipp Kössler (born December 21, 1984 in Berlin ) is a German politician ( Bündnis 90 / Die Grünen ), member of the Berlin House of Representatives and climate activist. He is spokesman for his group for climate and environmental protection, one world politics and club culture .

Kössler grew up in the East Berlin district of Köpenick . After graduating from the Alexander von Humboldt High School , he studied political science at the University of Erlangen , with a stay abroad in Sweden, and at the Free University of Berlin . He graduated there with a diploma and also holds a Master of European Political Sociology from Högskolan Dalarna . He then worked for the Heinrich Böll Foundation as a consultant for international climate policy and for the parliamentary group of the Greens, among other things as an energy consultant and as a consultant for the MP Bärbel Höhn .

Kössler had been a member of the Green Youth since 2005 and was its political director from 2010 to 2011. He was then spokesman for his party's federal energy working group for five years. From 2007 to 2010 he was on the board of Global Young Greens and, in this role, helped organize their 2010 congress in Berlin. Kössler is particularly committed to issues of climate protection and has been active in the climate movement since 2009. He was a member of the political group "Gegenstromberlin" and co-founder of the coalition "Coal Exit Berlin".

The focus of his work in the House of Representatives is the exit from coal in Berlin , adaptation to climate change , the realization of the One World House and securing the Berlin club scene. In addition, Kössler is committed to making Berlin a fair trade town, to get closer to the adopted model of Zero Waste in Berlin and to reduce the massive volume of coffee-to-go cups in Berlin.

As a parliamentary observer, he accompanied several actions against evictions and the end of the terrain protests.

Election to the House of Representatives

In June 2019, he received media attention when he commented on Twitter about a farmer whose fields were trampled by climate activists from Aktion Ende Terrain . Georg Kössler and his colleague, the head of the Rhineland-Palatinate Green Party, Jutta Paulus , were personally there. He publicly wrote a message to the farmer, who complained about the devastation of the fields, that his carrots were no more important than the climate. As a result, Kössler came into the public eye, whereupon attention was paid to his air travel. The AfD parliamentary group in the Berlin House of Representatives created a video based on Kössler's vacation photos, which is supposed to show possible air travel and was viewed more than 100,000 times on Facebook within 20 hours. Kössler called the video a fake and pointed out that two thirds of the flights criticized by the AfD did not take place. A death threat was also issued against Kössler via Messenger Telegram in relation to the Lübcke case .