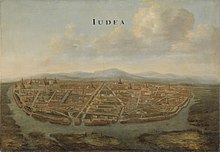 Historical view of Ayutthaya, which was commissioned by the Dutch East India Company and published in Vingboon's Atlas around 1660 . It can be seen today in the so-called Bushuis in Amsterdam . 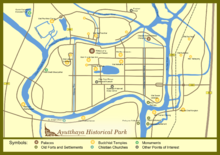 Overview map of the historical park

According to the Royal Chronicles of Ayutthaya , “in the year 712 of the Chula calendar , a year of the tiger, on Friday, the sixth day of the waxing moon in the fifth month, at three nalika and nine bat after daybreak” ( lit. : Cushman, 2000), on March 4, 1351 A.D. shortly after nine in the morning, founded by King U Thong .

The Thai Arts Department (about: Academy of the Arts ) began the first phase of restoring the ruins in 1956. In 1976 the area was declared a Historical Park ( Ayutthaya Historical Park ), which accelerated further restoration work. In 1991, the park was in the list of World Heritage of UNESCO added.