Wat Na Phra Men is a 13th century temple renovated in the 1990s . It is located across from the old Royal Palace on the north bank of the Lopburi River . Opposite it, on the other bank of the river in front of the old royal palace, was a large square where the celebrations of the royal cremations ( Phra Meru ) were held. From this fact the temple got its name. Wat Na Phra Men is not oriented to the east like most temples in Ayutthaya, but to the south towards the water.

The temple complex was founded in the 13th century. The ubosot dates from 1503 and was built under King Ramathibodi II . It is about 50 meters long and 16 meters wide. It was renovated in the first half of the 17th century by King Prasat Thong and redesigned in the typical Ayutthaya style. The gable above the main entrance is carved from teak and shows the Hindu god Vishnu on his mount (Vahana) Garuda , who fights with the snake Naga . The scene is accompanied by 26 angels ( see also: Apsara ). In the middle under the Nagas is the head of the demon Rahu ( see also: Asura (Buddhism) ).

The octagonal columns inside are adorned with capitals that are modeled on lotus buds . The windows consist of very narrow slits that let air through but hardly any light. The columns are painted red and gold, as is the coffered ceiling . 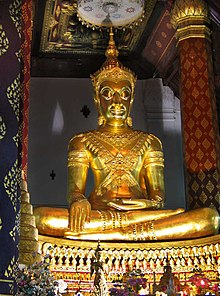 The most interesting objects of the temple are

Wat Na Phra Men played a historically interesting role in the conflict between Burma and Siam in the 18th century . First, a peace treaty between Burma and Ayutthaya was signed here in the middle of the 18th century . In 1760 the Burmese attacked again under King Alaungpaya and advanced against the city of Ayutthaya. They got as far as the area of ​​the temple and had cannons set up here , which threatened the royal palace on the other bank. The story goes that the Burmese king personally wanted to fire a cannon when it exploded, seriously wounding him. According to Burmese Codex, the siege and the whole attack were then abandoned. The king died on the return journey in the Tak area . The Burmese also spared the temple in the subsequent devastating attack on Ayutthaya, this time out of superstition , because they feared the death of the former king.