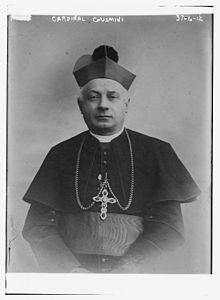 Giorgio Gusmini as Bishop of Foligno (1912)

Giorgio Gusmini studied in Bergamo , Rome and Padua and obtained a doctorate in Catholic theology , philosophy and literature . On September 21, 1878, he received the sacrament of ordination . From 1878 to 1880 he worked as a pastor in the diocese of Bergamo , from 1880 to 1882 he was released for further studies. From 1882 to 1900 he worked in Celena and Bergamo as a teacher and in training for priests. He was one of the founders of the Society of Catholic Universities. In 1901 he was appointed archpriest in Clusone . Until 1910 he also headed the parish of St. Alexander in Colonna and worked for Catholic Action . He was also co-editor of a Catholic newspaper.

1910 appointed him Pope Pius X to the Bishop of Foligno , 1914 Giorgio Gusmini Archbishop of Bologna. In the consistory on December 6, 1915, Pope Benedict XV took him . as a cardinal priest with the titular church of Santa Susanna in the college of cardinals . Giorgio Gusmini died on August 24, 1921 in Bologna and was buried in the Carthusian cemetery there. In 1923 his remains were transferred to the Bologna Cathedral .