As a barque sanctuary, the divine shadow was the decisive location for the solemn proclamation of the title of the throne . After receiving the royal insignia, the kings moved to the building of the shadow of God , sitting in a barge , in order to perform the coronation after proclaiming the name of the throne.

During the harvest processions, the kings carried a tent with them next to the statues of gods , for example Renenutet and Min , in order to set up the images of gods underneath at the respective field breakpoints. The tent itself was previously set up under a canopy , which is why the name tent hut or God's shadow was derived from this construction .

On the complex of the Djoser pyramid , in the area of ​​the Sedfest courtyard, there are mock chapels, the shape of which is a stone replica of the shadow of God, in order to make it available to the pharaoh for the otherworldly use.

In the Middle and New Kingdom , the old tent huts were replaced by massive station stamps, where the processional procession stopped and the traditional rites performed . The cult objects included a tent and canopy, which symbolically represented the shadow of God . 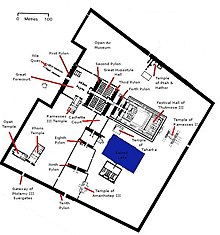 Site plan of the Amun-Re temple in Karnak

Thutmose I built a portico and another small pylon to the east behind the fourth pylon. In front of the fourth pylon, Thutmose I erected the first obelisks for the temple of Amun-Re in Karnak . The no longer preserved divine shadow barque sanctuary of Thutmose I was probably located between the obelisk and the portico. Also Hatshepsut was there to announce her throne name before together with Thutmose III. a new barque sanctuary of the shadow of God with the name "Staircase of Amun-Re " built in the immediate vicinity of the temple of Kamutef . In addition, the ceremonies of the Min festival took place in the newly erected god's shadow of Amun-Re as king of the gods .