A postcard from 1896 with a Hermes head

ELTA ( Greek ΕΛΤΑ for Ελληνικά Ταχυδρομεία Ellinika Tachydromia 'Greek Post') is a formerly state-owned Greek postal company that still has a dominant position in Greece today. The company is owned by the Greek government through the Hellenic Republic Asset Development Fund (90%) and the private Eurobank Ergasias (10%). The latter also took over the Post Savings Bank from ELTA in 2013 and integrated it into its own operations.

The company was founded in 1828 as an authority by a decree of Ioannis Kapodistrias , initially with four branches: In Nafplio , Syros , Tripoli and Epidavros .

In 1860 a stamp law was introduced. The first postage stamps were printed by the Paris mint and showed the head of the ancient Greek messenger of the gods Hermes .

A nationwide network of post offices had been built up by 1900. From 1892 to 1949 the post was connected to the telegraph and telephone network, then this was spun off with the establishment of OTE .

In 1926 the Italian airline Aero Espresso was founded, which from then on ensured air connections from Italy, Greece and Turkey. In the course of this, the first airmail stamps appeared and the correspondence between the countries was accelerated.

In 1970 the post office was transformed into a state-owned company and in 1996 into a private company with a state majority stake.

In 1982 the current postal code system was introduced.

In 2006 the Post-Sparkasse TT Hellenic Postbank , founded in 1900, was spun off. Since 2012, ELTA has no longer held any shares in the institute, which has since been dissolved.

ELTA has been licensed as an electricity supplier since 2016. 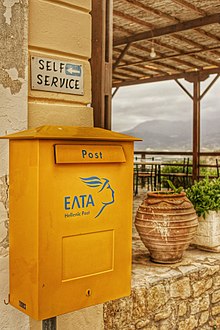 In 2018, the entire state share in the logistics company was transferred to the Hellenic Republic Asset Development Fund , founded in 2011 . This superordinate fund of the Greek state manages a number of infrastructural important companies in the country in order to optimize their internal processes and to remedy the consequences of the national economic crisis.

In addition to its postal division, ELTA has two subsidiaries. Tachimetafores ELTA SA operates the group's package logistics. The courier subsidiary's shareholders are the parent company (99.98%) and the company's employees, who hold 0.02% of the shares through the Panhellenic Federation of Postal Associations, the country's responsible trade union. The shares generate a total value of around 14 million euros.

KEK ELTA SA , endowed with 180,000 euros , provides training and further education for the company. The shareholders are the same parties, but in this case the union controls 30% of the company.

In total, the Greek Post operates a network of over 1,400 acceptance and delivery points. This high number is mainly due to the fragmented geography, i.e. the high number of islands, in Greece.

The special stamps for the Olympic Games in 1896 are among the most famous stamp issues . The sale contributed significantly to the financing of the games.

The company also operates two post offices on Athos , which issue their own postage stamps with the approval of the Universal Postal Union. The ELTA also maintains the Postal Museum (Athens) .