The Emil Mayrisch mine was a coal mine named after Emil Mayrisch owned by the Eschweiler Bergwerks-Verein (EBV) in Siersdorf near Aldenhoven in North Rhine-Westphalia in the Aachen coal field .

The pit was built by EBV to the north and east of the existing mines owned by the EBV, the pits Maria and Anna , located coal dismantle . After test drilling in the 1920s, sinking work began in 1938 . The Second World War interrupted work, so that coal production did not begin until April 15, 1952. The extraction was stopped on December 18, 1992 as the penultimate mine in the Aachen district.

The miners were settled by the EBV in Siersdorf itself and in the neighboring towns of Aldenhoven and Setterich .

In the 1960s, the mine was one of the most modern and efficient shaft systems in Europe. In order to rationalize mining in the area , underground connections to the neighboring pits Anna , Carl Alexander and Maria were built. Production then ended in these pits, so that from 1983 all of the existing production ran through Emil Mayrisch. A large part of the coal mined was brought to Alsdorf by train and processed into coke in the local coking plant . The construction of a new coking plant next to Emil Mayrisch, initially planned by the EBV, was never carried out because of the coal crisis that began in the late 1950s . 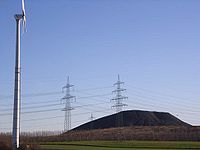 West side of the dump with wind turbine on the B57

To the north of the mine site was a coal-fired power station with an output of 150 MW. This was shut down in 1996 and then demolished. The mine dump extends over an area of ​​1.5 km² and reaches a height of 100 m above ground level. However, it is still subject to mountain supervision and may therefore not be entered.

Today only the old administration building and the mining dump to the northeast remind of the former mine. The “Emil Mayrisch” industrial park was created on their premises. In autumn 2005, an approximately 1.2 km long section of the motorway was built in the outdoor area for filming purposes.

In 2014 the Aldenhoven Testing Center was opened on the site .

Pits and collieries of the Eschweiler Mining Association