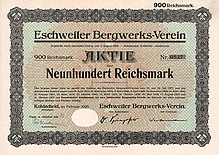 The Eschweiler mine association ( EBV ; another name: Anonymous Society Eschweiler mine association ), headquartered in Aldenhoven (until 1913 Eschweiler pump , until February 2008 Herzogenrath - Kohlscheid ) has a leading mining companies of the Aachen coalfield the Aachen region in the 19th and 20th centuries significantly embossed. After the closure of all mines and the relinquishment of the main administration in Kohlscheid at the beginning of 2008, EBV GmbH is now only active in the field of mining damage management and operates as an independent corporate brand.

Before that, the EBV concentrated on real estate activities and, as a limited liability company, was a subsidiary of the then RAG real estate association, which with around 8,500 residential units and numerous commercial properties belonged to the leading real estate service provider in the Aachen-Eschweiler region. Since September 2007, this business has been continued under the umbrella of Evonik Immobilien GmbH / Evonik Wohnen GmbH, the real estate business division of Evonik Industries AG , which was renamed Vivawest in 2011 .

Emil Mayrisch mine with "EBV"

Former bridge abutment from 1912 in pump stitch with "EBV"

On August 2, 1834, a contract was signed in Eschweiler for the establishment of a stock corporation , the Eschweiler Mining Association. The notary contract was signed by a woman - Christine Englerth , who was able to maintain and expand her family's mining holdings undivided with skill and care. With her death on May 4, 1838, the Eschweiler Mining Association was established; this created the first Prussian mining company. The first company director from 1838 to 1847 was Johann Heinrich Graeser .

The EBV originally operated hard coal mining in Eschweiler Kohlberg in the Inderevier . From 1863 the company's activities were expanded to include the worm area with the purchase of the Anna mine in Alsdorf . In 1907, the Eschweiler Mining Association took over the association for hard coal mining in the Wurmrevier , the second large mining company in the Aachen district. Through the merger , the EBV gained new mines in Alsdorf-Mariadorf and Würselen . While the EBV had specialized exclusively in the market for industrial coal until 1907, all the mines that have now been added mainly promoted domestic coal. The last colliery that the EBV reopened in the Aachen district was the Emil Mayrisch mine in Aldenhoven-Siersdorf (construction period: 1938–1952). The mine bears the name of the technical director general of the Luxembourg steel group Arbed . Since 1913, Arbed has been closely linked to the EBV through an interest agreement. Since the mid-1920s, she held over 90% of the share capital of the Aachen company. Through the connection, Arbed secured its own coking coal base and in return undertook to co-finance necessary investments by the EBV. This community of interests lasted over 75 years until 1989 and only expired when the EBV was taken over by Ruhrkohle AG . Since the coking coal supplies in the Aachen district were slowly becoming scarce since the mid-1960s, the EBV also expanded into the Ruhr area. He bought the Erin and Graf Schwerin collieries in Castrop-Rauxel , as well as the Westphalia colliery in Ahlen and the Lothringen colliery in Bochum .

With the end of coal mining in the Aachen mining area in 1997, the EBV's business area changed almost completely to a real estate service provider. Since it used to be customary to house the miners in the company's own apartments, the EBV owns several thousand residential units in the Aachen region as well as numerous building plots. In addition, there are the disused mining facilities, which to a large extent have been or are being converted into industrial and commercial areas. As part of the restructuring of the RAG Group, EBV is now a subsidiary of EVONIK-Immobilien with group headquarters in Essen and a customer office in Alsdorf.

In line with the relocation of coal mining from the Inderevier to the Wurmrevier, the central office of the EBV was relocated from Eschweiler-Pump to Kohlscheid in 1913 . The administration of the EBV ironworks department will be housed in the vacant building in Eschweiler - popularly known as the "Bergamt" - until 1986.

In 2008 the EBV gave up the head office in Kohlscheid and moved to Hückelhoven .

The German Fibercast GmbH was an early 1960s by EBV formed company for glass fiber reinforced plastic pipes. It later changed its name to Fiberdur Vanck and built a new plant in Aldenhoven-Siersdorf in 1996. The Fibercast had its premises in the last remaining buildings of the pit reserve between Eschweiler Center and Nothberg.

With the "Eschweilerstraße" in Hürth reference was made to the former factory site of the "Ribbert-Werke", since the EBV in 1920 took over the briquette and clay tube factory of these plants. The Ribbertwerke, after whose founder Moritz Wilhelm Ribbert a street in Hürth is already named, were the first and for a long time the largest industrial enterprise in Hürth. In 1928 they were sold by the EBV to the Roddergrube and largely destroyed by bombing in 1944.

For the employees, extensive housing developments were built in the 1920s by the Stolberg-Aachen construction company Robert Grünzig GmbH .

Pits and collieries of the Eschweiler Mining Association