Johannes "Hanne" Sobek (born March 18, 1900 in Mirow ; † February 17, 1989 in Berlin ) was a German football player and coach . He gained fame as a player for Hertha BSC , with whom he reached the final of the German championship six times in a row and won it twice.

Johannes Sobek was born on March 18, 1900 as Paul Friedrich Max Johannes Wiechmann in Mirow. He later took the surname Sobek from his adoptive father. His second marriage to his wife Elisabeth resulted in his son Bernd , who later also played high-class football. Due to a misconduct, his son was registered with the name Sobeck at birth . This later led to problems when they entered the German-German border together. So Sobek had a "c" added to his surname as this was the cheaper option (a change in his son's ID would have cost 5,000  marks ).

At the age of ten he started playing football at Bavaria 09 and went to Alemannia 90 in 1920 . For this club he played his first game in the national jersey on June 3, 1923, in Basel against Switzerland. He played for Hertha BSC from 1925 to 1939 , but was reactivated several times in the following years. The half-forward was six times in a row in the final of the German championship from 1926 to 1931. In 1930 and 1931 he and his Hertha team became German champions . 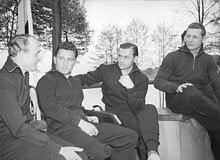 Sobek (left) as coach of the Berlin city selection in conversation with the players Fritzsche , Eilitz and Strehlow.

From 1923 to 1931 Sobek wore the jersey of the German national soccer team in ten international matches and scored two goals. All of Sobek's DFB games were friendship games.

In the first post-war years, Sobek was a coach at SC Union Oberschöneweide . In 1950 the team qualified for the German championship. However, the team was refused entry to West Germany. Without further ado, the coach and almost the entire first team decided to flee to West Berlin . There they then founded the SC Union 06 Berlin as the official successor club. In West Berlin, he also became the trainer responsible for selecting Berlin's cities. In 1955 he trained an all-Berlin selection together with the East Berlin Kurt Vorkauf for a game against a city selection from Prague (1-0). This selection only existed for a short time and had to be stopped again under pressure from Walter Ulbricht .

As coach of Hertha (1959–1963) he won the Berlin championship in 1961 and 1963. From February to July 1965 Sobek was emergency chairman of the board of Hertha BSC, but could not prevent the team's relegation from the First Bundesliga , which the DFB caused due to unauthorized high hand money and salaries.

At the end of his career as an active player, Sobek worked as a reporter for the Berliner Rundfunk (1938–1945). In the silent film Die elf Teufel from 1927 he stood in front of the camera next to Willi Forst and Evelyn Holt , was close friends with Hans Albers and assisted the juggler Enrico Rastelli in the winter garden .

On July 24, 1999, a sports facility near Louise-Schroeder-Platz in Berlin-Wedding was renamed Hanne-Sobek-Sportanlage . In August 2006, the forecourt of the Berlin Gesundbrunnen train station was named after him in Hanne-Sobek-Platz . This is not far from his long-term apartment in the Atlantic Garden City and the stadium at Gesundbrunnen , which was demolished in 1974 and known as the Hertha home ground under the name “Plumpe”.

Building of the Hanne Sobek Sports Complex on Osloer Strasse