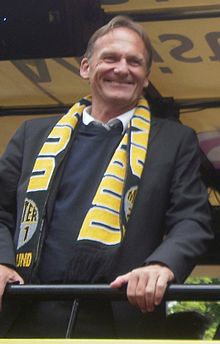 Hans-Joachim "Aki" Watzke (born June 21, 1959 in Marsberg , North Rhine-Westphalia ) is a German entrepreneur and has been managing director of the Bundesliga soccer club Borussia Dortmund since 2005 .

Since 2001 Watzke was also treasurer of BVB until he was finally appointed managing director of Borussia Dortmund GmbH & Co. KGaA on February 15, 2005 , whose activities he had already started on February 11, 2005. He finally handed over the office of treasurer on November 20, 2005 to Reinhold Lunow. Watzke also runs the business of the wholly owned subsidiary BVB Stadion Holding GmbH . His contract as chairman of the management board of Borussia Dortmund Geschäftsführungs-GmbH runs until December 31, 2022.

Together with the club's president Reinhard Rauball and the financial director Thomas Treß , Watzke saved Borussia Dortmund from bankruptcy in 2006 by restructuring its liabilities . In the following years, BVB was able to steadily reduce the company's legacy. He made Borussia Dortmund one of the leading clubs in Europe.

Watzke is an advocate of the 50 + 1 rule , which limits the influence of investors on the operational business of a Bundesliga club. Furthermore, he appears as a critic of the current distribution of television money in the Bundesliga, which in his opinion traditional clubs such as Schalke 04 or Borussia Dortmund compared to less strong but financially better off clubs such as VfL Wolfsburg , Bayer 04 Leverkusen or the TSG 1899 Hoffenheim disadvantaged. His statements at the BVB general meeting in November 2009 were widely criticized; For example, he was known by Bundesliga colleagues from Wolfsburg and Hoffenheim, but also in the media, e.g. B. by Reinhold Beckmann in the Sportschau , referred to as a populist .

During the COVID-19 pandemic in Germany , Watzke stated in mid-March 2020 that he wanted to forego a third of his salary in favor of the general public. The pandemic led to the closure of German league operations and caused financial cuts in all walks of life.

Hans-Joachim Watzke is a son of the politician Hans Watzke, who died in 2014 . He lives in the Erlinghausen district of his native Marsberg , is married and has twins; a daughter and a son.

Watzke has been a member of the CDU since 1975 and a member of the BVB since 1996. He is also the first chairman of the lower-class SV Rot-Weiß Erlinghausen , for which he played as an active amateur footballer for 30 years.

In October 2019, Watzke presented his autobiography .